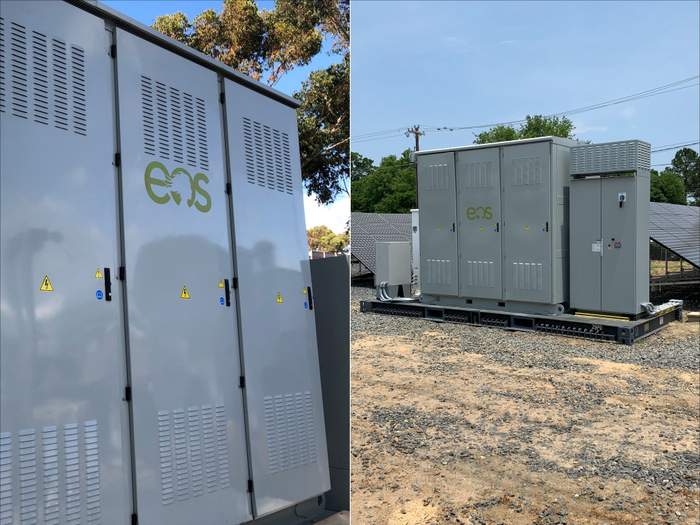 Eos Energy Storage (Eos) announced two new projects deploying the company’s Aurora 2.0 battery system in major markets on both coasts of the United States. The next generation solution integrates the company’s aqueous, zinc Znyth battery technology as a safe, sustainable, and scalable alternative to Lithium Ion. The Eos Aurora 2.0 has been installed by Duke Energy as part of a DC-coupled solar + storage system in North Carolina while Eos concurrently deploys its battery as a behind-the-meter solution at the University of California, San Diego in a project funded by the California Energy Commission.

“These two projects represent an important step in our journey to help accelerate clean energy while ensuring that it is competitive and reliable. With over ten years of testing and refinement, these deployments demonstrate that our system is ready to scale in two of the fastest growing renewable energy markets in the world,” said Philippe Bouchard, Eos’ SVP of Business Development.

In North Carolina, one of the fastest growing solar markets in the U.S., Duke Energy is commissioning a 30kW/120kWh system at its McAlpine test facility. The battery has been directly integrated, or DC-coupled, to a grid-connected solar array using a DC-DC converter instead of an AC-inverter to eliminate unnecessary hardware and reduce efficiency losses. Because the Eos system does not require HVAC or fire suppression, it can be decentralized and distributed throughout the solar array allowing developers to maximize energy production while minimizing upfront capital cost and O&M.

“With $500 million of battery storage projects slated for the Carolinas over the next 10 years, Duke Energy is actively deploying the technology in our communities as a way to enhance reliability, defer system upgrades and deliver operational benefits for all customers,” said Tom Fenimore, Business Development Manager at Duke Energy.

Meanwhile, California continues to surge forward to 60% renewable electricity by 2030, 100% clean electricity by 2045, and 2GW of near-term storage procurement. The deployment at University of California, San Diego will demonstrate the Eos Aurora’s multi-hour discharge capability as a means to reduce demand charges and manage retail energy consumption for commercial and industrial customers. The system provides 30kW/120kWh as a modular, AC-integrated, plug-and-play solution optimized for behind-the-meter applications. The project also prepares Eos for delivery of a larger 10MW/40MWh utility-scale project contracted by developer Convergent Energy + Power with Pacific Gas & Electric. To date, Eos is the only non-Lithium energy storage technology contracted through California’s statewide procurement mandate AB2514.

Both projects are installed and undergoing commissioning; they will be monitored to test the Aurora 2.0 performance in different use cases and operating conditions.