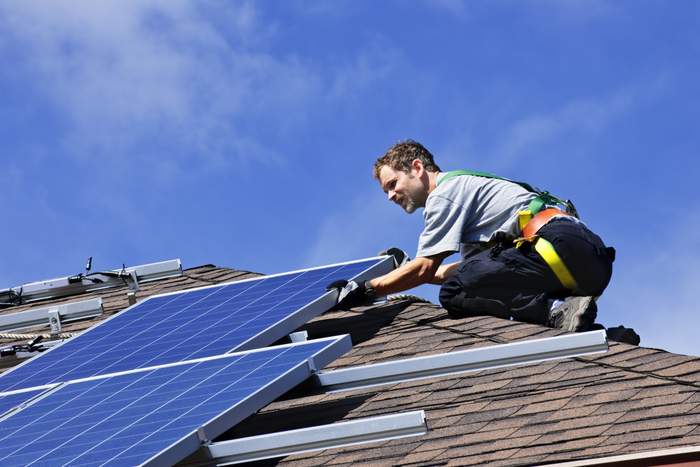 The Solar+ Decade is starting off as the module-level power electronics (MLPE) decade. In its most recent U.S. PV Leaderboard, Wood Mackenzie reports SolarEdge inverters and optimizers were used on 60.5 percent of U.S. residential installations through the first three quarters of 2019, with Enphase a distant second at 19.2 percent and an amalgam of string inverter companies making up the other 20 percent. Pretty wild considering way back in 2013, SolarEdge held a mere 4.5 percent of the market, while string inverter leaders (ABB, SMA and Fronius most notably) had around 70 percent share of the market.

That flip-flop got me thinking about the impact of NEC 2017 again. MLPE has been widely adopted for reasons such as improved power yields and flexibility in system design in shaded roof scenarios, but NEC 2017’s module-level rapid shutdown standard all but wrote it into code in the name of first responder safety. With the market (and future of the solar industry) now so heavily leaning into MLPE, the code that crowned it is worth re-examining.

To quickly reiterate: NEC 2014 marked the debut of rapid system shutdown. It defined an array boundary of 10 feet, and the system needed the ability to limit the current leaving the array to 30 volts within 10 seconds. It required one device in the array to trigger this action. In NEC 2017, this standard evolved to module-level shutdown, instituting the following code changes:

• Array boundary reduced to 1 foot
• Timeframe increased from 10 seconds to 30 seconds
• Voltage at conductors within the array must be at 80 volts.

Currently, there are three ways to achieve this:

• Microinverters
• Attaching another device to the module in a string inverter design.
• Installing modules embedded with optimizer chips.

The latter of those is possible — we even wrote about one such solution we thought was coming to market back in 2017 — but it may never reach the market due to patent claims raised by SolarEdge and Tigo Energy. That means bullet points one and two are the simplest ways to comply with NEC 2017.

In 2019, the SunSpec Alliance and its members performed a comprehensive review of prior art related to the claims and have determined them to be without merit. At the time of this writing, SunSpec is in the final stages putting this issue to rest. To date, four companies (AP Systems, Fronius, SMA, and Texas Instruments) are shipping SunSpec Rapid Shutdown compatible products and, according to SunSpec, three others have signaled their intentions to do the same. More on this later.

But as it stands, in order to comply with this NEC 2017 safety standard, solar installers have no other choice than to install more connection points on a roof than was necessary for compliance with NEC 2014 – up to three times as many.

How do we define safety?

In the same year that MLPE officially took over the inverter marketplace, Walmart sued Tesla over fires (seven total). Those fires served as a wakeup call for the company, which then initiated a massive parts replacement initiative, originally reported on by Business Insider, called Project Titan:

“A portion of SolarCity-installed modules and optimizers from various manufacturers were made with H4 connectors from Amphenol, a part that was commonly used across the industry at the time,” a Tesla representative told Business Insider.

The person went on to say that Tesla’s software-monitoring applications found that a “small number” of the connectors experienced failures and disconnections higher than their standards allowed.

These were ultimately correctable, human errors that were swiftly addressed. But, it’s also true that an optimizer-heavy design inherently increases this possibility compared to a traditional string inverter design because of all the extra connection points.

The BRE National Solar Centre, third-party researchers based in the UK, took a deep dive into solar systems involved in house fires and published its findings in “Fire and Solar PV Systems – Investigations and Evidence in July 2017.” The biggest takeaway to underline and bold is that, when installed correctly, PV systems are super safe. The BRE study discovered fewer than 60 fire incidents in a market of about 1 million systems installed over the prior seven years – 42 of which were determined to be caused by the PV system, and only 17 of which were labeled as “serious fires” that spread beyond their area of origin.

Among components that were implicated in their research, DC isolators were cited in 18 incidents (30 percent), the majority of which were due to poor installation practices. The one example shown in the report was that of an isolator mounted on an exposed exterior wall that filled with water via the top-mounted cable entries.

The second biggest culprit was the DC connector with 10. This makes sense considering an electrical arc is the number one cause of a PV fire. Connectors heat up over a longer period of time and burn up if there’s an issue. Most of the time when they burn up or melt, it doesn’t create a larger scale fire, but when connectors are mismatched, the probability of an incident is much higher. This could be due to the tools used to make the connection (cheap crimpers from China) or just regular old human error.

Mismatched connectors have always been a problem in PV, section 110.3 of the NEC, but the lines have blurred with off-brand manufacturers stating things like “MC4 compatible!” on their connectors, which is not true and confusing for installers. The NEC 2020 code cycle is addressing this, likely requiring UL certification for inter-matching connectors. That’s progress, but:

1. The UL test standard just tests a sample of the connectors. It doesn’t evaluate the design, specifications or factory tolerances.

3. The mismatched toothpaste is already out of the tube. Code adoption is wildly different all across the
country. A few states adopted NEC 2020 on Jan. 1. Others – California being one – are just now adopting NEC 2017. Others still could be using NEC 2008. Will first responders even know what code to expect when they arrive?

Speaking of first responders, is all of this code changing even keeping them safer?

Again: The risk of a PV-caused rooftop fire is small. But even more remote than a mismatched-connector-sparked rooftop fire is the possibility that a first responder will be seriously injured by an electric shock delivered by a PV system, regardless of which version of the NEC is in place. In the very specific scenario of a firefighter needing to cut through the PV array atop a building for access in an emergency, studies from both Germany and Sandia National Laboratories show that standard firefighting PPE mitigate the risks. From “Updated Evaluation of Shock Hazards to Firefighters Working In Proximity of PV Systems” published in 2017 by Sandia:

“We have assessed the worst case hazards to firefighters under power levels which may be present under fire fighting conditions. Detailed measurements were conducted under nighttime conditions. This work has shown that under worst case ambient illumination (full moon) and typical emergency lighting conditions, the current hazards to firefighters is low. All tested conditions showed that worst-case hazard is well below the limits of the hazard by continuous electrical current set by IEC 60479-1.”

The Sandia report shows that current hazard is directly related to personnel impedance as well as array maximum voltage. PPE resistance is larger than body impedance. This means minimizing the current hazard faced by emergency personnel is dependent on proper PPE “as well as array segmentation strategies to decrease voltage levels.” Even at 1,500 volts, an electric shock delivered to someone wearing a dry PPE glove will receive 6 miliamps. A wet glove would be 103 milliamps, which Sandia’s study says is far enough away from a lethal level.

OSHA outlines electrical protective equipment in 29 CFR 1910.137. Electrical safety gloves are categorized by the level of voltage protection they provide, which breaks down as follows:

A German study conducted by the Federal Ministry for Economic Affairs & Energy, TÜV Rheinland, and Fraunhofer in March 2015, “Assessment of the Fire Risk in Photovoltaic Systems and Elaboration of Safety Concepts for Minimization of Risks,” came to the same conclusions. And then in “Recent Facts about Photovoltaics in Germany,” Fraunhofer noted that with more than 1.4 million PV plants installed in Germany, to that point in time, no firefighter had been injured by PV power while responding to a fire. It is worth noting Germany doesn’t mandate rapid shutdown equipment of any kind (and arrays there can be up to 1,000 VDC on homes and 1,500 VDC on businesses).

It seems obvious that the safest PV system for a first responder is the one with the lowest possible risk of sparking a fire in the first place.

What about the installer?

Lost in the industry’s quest for safety it seems is the actual solar installer. More connection points and electronics on a roof can only mean more trips up to the roof, as well as longer hours on the roof. In January, USA Today content partner 24/7 Wall St. reviewed fatal injury rates for the 71 occupations listed the Bureau of Labor Statistics’ Census of Fatal Occupational Injuries program. Solar installer didn’t make the top 25, and neither did firefighter, but this adjacent industry did:

“Roofing is one of just four professions in which the fatal injury rate exceeded a rate of 50 deadly incidents per 100,000 full-time equivalent workers in 2018. The work of installing or replacing roofs is often done at considerable heights, increasing the risk of being seriously injured and worse by a fall. In fact, 74 of the 96 fatal accidents roofers suffered on the job were classified as falls, slips, and trips.”

When also considering the OPEX factor, mandating more reasons for installers to take a drive (traffic accidents are the number 1 cause of workplace death) and then get on a roof, are curious decisions made in the name of safety, especially given the above studies on the risks that PV systems pose to first responders in the first place.

Where do we go from here?

Taken all together, NEC 2017’s module-level shutdown looks like a solution to a safety problem that didn’t exist and instead codified a greater possibility for human error, risk and connector mismatch. But the virtue of the NEC is there’s always another chance to improve. In that spirit, here are some suggestions:

1. Develop a real ANSI standard for PV connectors that any/all manufacturers can build to.

2. Use NEC 2023 a chance to prioritize solar installer safety.

3. Consider the unintended effect that code changes could have on limiting product choice.

And since module-level rapid shutdown is likely here to stay, I’d also include the wider adoption of open interoperability standards from the SunSpec Alliance, a trade alliance of more than 100 solar and storage distributed energy industry participants, as a key going forward. The open SunSpec Communication Signal for Rapid Shutdown specification was developed by leading industrial companies with deep patent portfolios and decades of experience with the technologies comprising the open SunSpec solution. I reached out to Tom Tansy, Chairman of the SunSpec Alliance, for an update on where these solutions stand.

“The exercise of developing safety standards, under tight deadlines, for a rapidly evolving technology highlights the potential for intellectual property law to conflict with public safety law,“ Tansy said. “Under dynamic conditions, aggressive competitors can make claims against rivals that may or may not be real. But in the short run, with no time to validate, who would know?

“It has never been a question of whether the SunSpec specification would stand up, “ he said. “The only question was how SunSpec members would have to present the evidence to prove it. We’ve been asked and so now we’ll answer. We look forward to competing in 2020.”