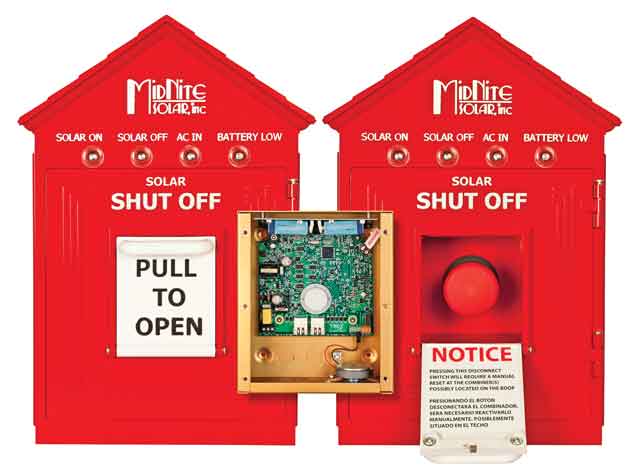 The Birdhouse from MidNite Solar is one of the more standout off-the-roof RSS solutions on the market.

The updated 2014 National Electrical Code’s (NEC) manual, Section 690.12, says that a PV system needs to be able to reduce the voltage and current to 30 volts and 240 volt-amps, within a 10-ft perimeter of the array after rapid shutdown is initiated. It’s a straightforward name and concept, but there are still unknowns for meeting the requirement and who is enforcing the code.

As Brian Lydic, standards and technology integration engineer for Fronius, points out, what’s missing from the current requirement is an explanation of where the solution needs to be. For one, the 2014 NEC does not exactly define the boundary of a PV array.

“‘A mechanically integrated assembly of modules or panels’ could possibly be interpreted differently by different AHJs. This may be particularly important on commercial rooftops where sections of the array may be separated, or even a row could be considered an ‘array,’” Lydic says.

Even on a residential rooftop, different portions of the array might need different rapid shutdown devices where the sub-arrays are more than 20 ft apart. Another detail up for interpretation, at least until the 2017 NEC, is where the initiation device needs to be located.

RELATED: How to select the right combiner box for your next solar project

Twenty-two states adopted the 2014 NEC as of Jan. 1 with Massachusetts most ardently adhering to RSS. Jurisdictions in New Mexico and California were also mentioned as enforcing it, but still not a majority of California counties. 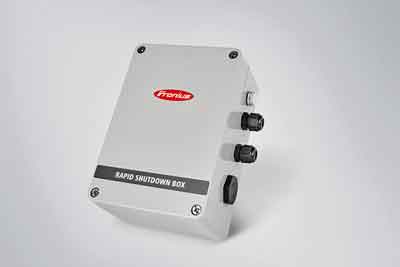 The Fronius Rapid Shutdown Box is one string-level solution that acts upon loss of AC voltage.

At the moment, there are a variety of solutions available to meet RSS code: DC/DC electronics (module-level or otherwise), remote-disconnecting string combiners, string/array-level rapid shutdown boxes, inverters mounted near the array and so on. For inverters to comply, they must have a way of discharging their input terminals/conductors; otherwise an extra isolation device may be necessary at the inverter and not only the array.

“A lot of solutions out there rely on the building’s AC power to give that signal to shutdown,” says Sarah Ozga, ABB’s commercial inverters product manager for NA, which has a line of three residential rapid system shutdown boxes available (RS2-1CN6/RS2-2PN6/RS4-2CN6) that do just that, in any design configuration needed. “So, when firefighters shutdown the power to the home, the RSS disconnects those conductors on the roof.”

Fronius will soon release its own Rapid Shutdown Box, a string-level solution that integrates with the Primo and Galvo inverters and acts upon loss of AC voltage. Systems triggered by AC loss can be great for residential installs, but many commercial sites simply cannot have their power completely shut off, which means the PV system needs an additional button or switch to initiate RSS.

In that case, some manufacturers offer larger string inverters for commercial rooftop systems that can comply with rapid showdown in two ways.

“One way to achieve rapid shutdown in commercial systems is to mount the inverter close to the array, within the 10-ft perimeter,” Ozga says. “The second option is to use a junction/combiner box that has a contactor incorporated. Now, you can’t just use any box with a contactor; you have to make sure you test the inverter and contactor together so that any residual voltage is bled off the string inverter.”

For example, ABB has worked closely with SolarBOS to make sure its combiners with 600 or 1,000 VDC load-break rated contactors will seamlessly work together.

For added convenience and compliance, MidNite Solar’s Birdhouse provides a disconnect switch at ground level.
“Some people said, ‘we don’t want to go up on the roof; we don’t even want to look for inverters — just do it quickly,’” Silva says. “That’s where we shine, as we have the only UL-listed off-the-shelf solution with our Birdhouse and high-voltage disconnecting combiners. When you push the button on the Birdhouse, it will disconnect everything tied to it. In some setups, the primary grid-tied inverter has to be shutdown. With batteries, you have power there all of the time, so you have to be able to turn it off and not push back to the grid.”

“It makes sense that an initiation method should be accessible to firefighters,” Lydic says. “If only a meter is accessible from the outside of a building, the fire service may or may not be comfortable having the rapid shutdown initiation device located inside. The option to add a mechanical initiation device in addition to upstream AC switches may be convenient when the AHJ requires it.”

If the rapid shutdown box acts as a combiner, according to Lydic, then it must include a manually-operable load-break disconnect per 690.15(C), otherwise an additional DC disconnect needs to be installed next to the box.
Whatever solution you choose, Ozga, who worked for years as an installer, says to consider the value or efficiencies new RSS requirements bring to a project, instead of seeing it as just another added cost.

“Consider a situation where there were supposed to be four strings running from roof to inverter and an installer used PV wire for six of those. Now you can use a rapid shutdown box, which adds cost, but can combine those strings. Now you can transition to a less expensive wire, have fewer conductors and require less labor to install.”

Different applications and regions will require different combiner solutions. Check with your Authority Having Jurisdiction to fully understand what is required for each install and source accordingly.