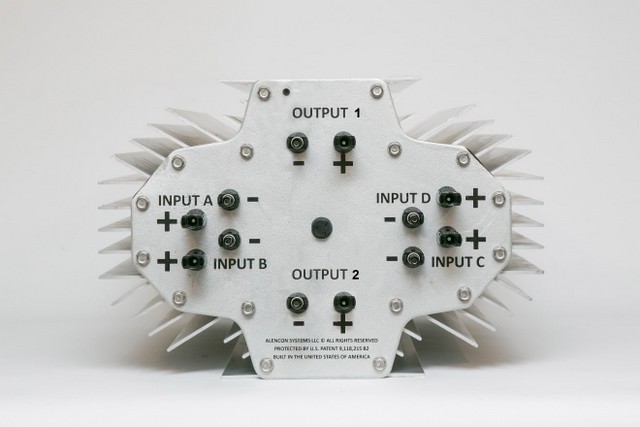 The Alencon SPOT – which stands for String Power Optimizer and Transmitter – is a string level DC-DC optimizer which optimizes the power from four PV string inputs with voltages ranging from 600 to 1500 volts. The SPOT outputs power through two outputs at any range of voltage that is completely configurable from one deployment to the next. The ES suffix designates “Energy Storage.” The SPOT-ES family of products has been specifically designed for the needs of DC-coupled Solar + Storage deployments.

The improvements in the SPOT-ES V5 are vast from previous generations of the SPOT family of products. The enhancements include a true 1500-volt input based on 1700 volt rated Silicon Carbide (SiC) rated mosfets, a unique ability to map a wide battery charge/discharge voltage range, reliability enhancements developed in concert with leading Solar + Storage technology providers and integrators as well as more flexible communications options for more better integration with Solar + Storage and Microgrid control systems.

RELATED: How to optimize performance and profit through O&M monitoring

The SPOT-ES V5 is the first utility scale PV DC-DC optimizer capable of supporting true 1500-volt string input. The SPOT-ES 1500 can accept four 1500-volt string inputs and provides the two outputs. Two outputs have been provided to allow for the use of standard rated PV connectors at high power and current. The SPOT-ES 1500 can achieve higher voltage input because it is based on state-of-the-art 1700 volt rated Silicon Carbide (SiC) mosfets.

The SPOT-ES V5 takes advantage of Alencon’s patented galvanically isolated design. The SPOT-ES’s galvanic isolation concept completely isolates the PV input from the output by attaching isolation transformers to each PV input. This technique provides for a particularly unique benefit in the DC-coupling of Solar + Storage because the integral magnetics to the SPOT can be easily configured from one deployment to another to easily support a broad battery charge/discharge DC-bus voltage, where the voltage range could vary by as much 20% from complete discharge to full charge. This feature provides a significant benefit when connecting lower voltage batteries to 1500-volt PV systems.
Enhanced Solar + Storage Reliability Features

The SPOT-ES V5 includes a new, ultra-fast circuit to protect the SPOT from sudden system power output overloads. Such overloads can happen with greater frequency in DC-coupled Solar + Storage and Microgrids than traditional PV installations due to the increased complexity of such systems. The result of such occurrences can have very grave consequences to the entire system and hence the SPOT’s ability to better protect itself in such events offers a great deal of additional reliability.

Communications between major components in Solar + Storage systems and Microgrids is critical. Such systems typically utilize master system controllers that directly interface with all components in the system including the battery, inverter and of course the SPOTs. The SPOT-ES V5 features enhanced communications features to allow it to be interfaced with third party system controllers via either Modbus TCP, for communicating to the SPOTs wirelessly, or Modbus RTU, which allows for hardwire communication to each SPOT directly. The enhanced communication functionality offered in the SPOT-ES V5 allows for unprecedentedly granular control over the PV including the ability to curtail production at the string level.