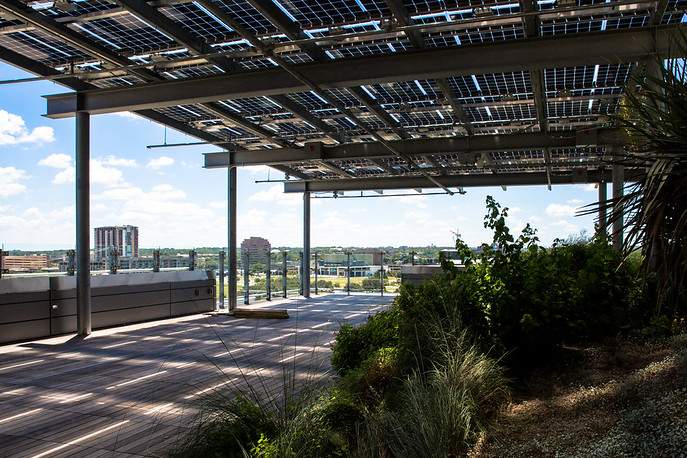 Apparent was the only energy management company capable of meeting Austin Energy’s strict grid synchronization requirements, with a hardware and software solution that results in more than $100,000 in annual savings, enough to power 130 households per year.

“With consumer-based clean energy generation expected to increase by 50 percent between 2019 and 2024, the Austin Central Library is a great example for cities to mirror,” said Jacqueline DeSouza, President of Apparent, “As distributed energy resources, like rooftop solar, battery storage, and electric vehicles, are adopted at growing rates, being able to use their energy generation and storage potential transforms energy from a commodity to a controllable asset.”

Apparent technology monitors ACL’s demand and, working in sub-seconds, matches available solar generation to the facility’s energy needs. This real-time process enables the inverters to maximize solar generation and use behind-the-meter. Apparent met Austin Energy’s required management scope for an interconnected behind the meter distributed energy generator by ensuring ACL’s solar system would not export (backfeed) any energy to the grid and could read, reckon, and react to signals from the utility in three-seconds or less.

The system’s self-diagnosis capability to shut down individual inverters while still allowing the rest of the inverter string and system to operate was also a crucial functionality.

Today, ACL’s solar generator managed by Apparent operates seamlessly with the local grid while keeping costs down and lowering the library’s carbon footprint. In addition, the technology is plug-and-play, making the transition seamless for library staff.

Apparent’s energy management platform actively manages clean energy from any connected source to provide the exact amount of energy where and when it’s needed. In the case of ACL, Apparent prevents power from going where it’s not needed or required by the building or local grid. Apparent’s unique solutions present applications for a new energy market that connects behind-the-meter consumer supply and demand with the energy market.