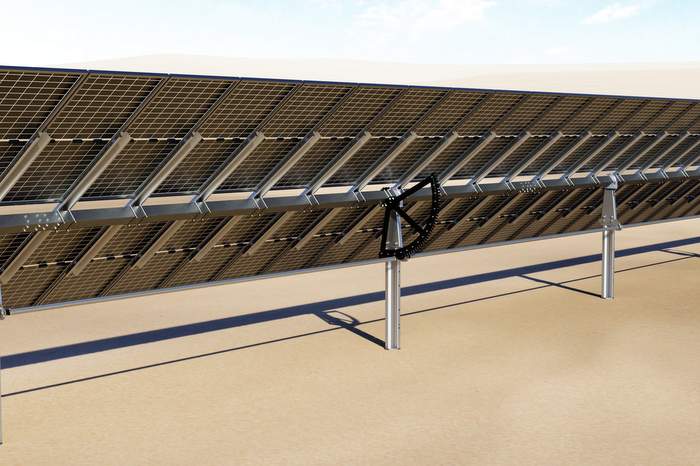 In case you missed it in the fog of virtual SPI this year, Ideematec solar trackers are making their official debut in the United States in 2021. While new to the U.S., Ideematec has proven its tracker tech over 12 years, gaining market share in Europe, the Middle East and South Asia Pacific. Let’s get to know Ideematec and its new Horizon L:Tec solar trackers before the calendar turns.

Quickly: The Horizon L:Tec is a two-module-in-portrait (2P) tracker, but a one-module-in-portrait (1P) using the same technology is also on the way. Key feature is a patented locking technology that secures modules in position against torsional galloping, and Ideematec’s signature decoupled drive technology transports dynamic loads into foundational posts and away from gearboxes.

First build: Hecate Energy staked its claim as the company’s first U.S. buyer with a 4-MW project, located in Newberry, S.C., which will be installed by construction and project management services company Reach Construction Group. The facility is on track to complete commissioning in the Spring of 2021.

Outlook: The North American team aims for product deployment within the hundred MW range in 2021 and is shooting for more of a leading role throughout the region by 2024.

Measuring 190 meters in length, Horizon L:Tec is the longest solar tracker on the global market. One product can be designed with up to eight tables and up to 360 panels over uneven terrain (gradients of up to 36%!), powered by just one drive unit and one tracker control unit. Zooming out on the site, the cluster control unit controls up to 144 tracker controllers. With an output of 112 kWp per drive unit, Ideematec boasts one of the best drive/performance ratios on the market

Ideematec trackers require four times fewer gearboxes and motors than conventional trackers, which means reduced installation time and maintenance costs. The low center of gravity gives the structure exceptional stability. The wire rope pulleys transfer 95% of the impacting forces past the drive unit and directly into the foundations. This results in a drastic reduction of the foundation number and drive units (only 180 foundations per MWp). Wear and material fatigue are reduced to a minimum. The drive unit boasts 0.1° accuracy over a drive length of 160 m.

The synchronized drive enables consistently precise module inclination over the entire length of the tracker, which optimizes MPP. Upgraded tracking range of plus/minus 60 degrees carves out an additional 1 percent or more of yield. The system’s new TAN communication tech reduces the need for cable trenches by 50 percent.

Another cool feature to add is a high-efficiency robot panel cleaner tacked on the end that can cover 200 kWp in one route.