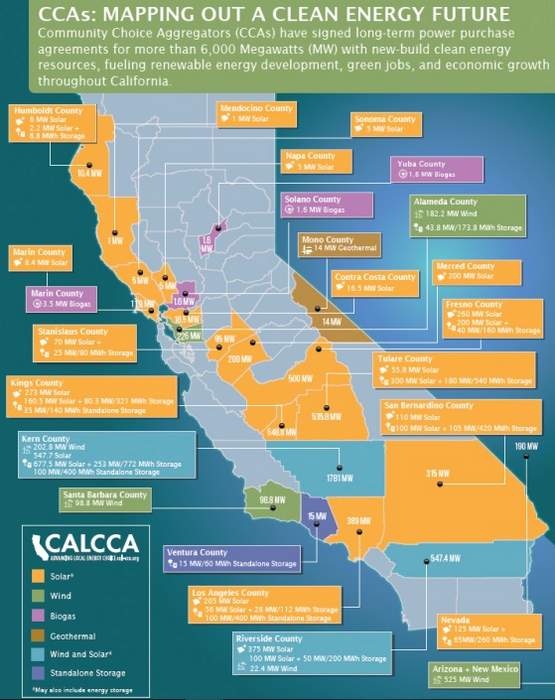 “These new totals show that community choice energy providers are continuing to make great progress in securing the energy resources California needs to build a clean, affordable, and reliable electric system,” said CalCCA Executive Director Beth Vaughan. “At the same time, CCAs are driving economic recovery and job creation in the state when they are most needed.”

Each November for the last three years, CalCCA has provided a snapshot of the progress CCAs are making in securing new-build clean energy resources through long-term Power Purchase Agreements. This year’s update shows CCAs have added in a single year a record-setting amount of clean energy to their portfolios while bringing more diverse resources to the mix.

Community Choice Aggregators have signed renewable energy and energy storage Power Purchase Agreements totaling 2,600 megawatts in the last year, bringing the grand total to more than 6,000 megawatts in new-build solar, wind, bio-gas, energy storage, and, for the first time, geothermal energy. The geothermal power plant, which is projected to be completed in 2021, will be the first new geothermal facility built in the California Independent System Operator balancing area in 30 years. 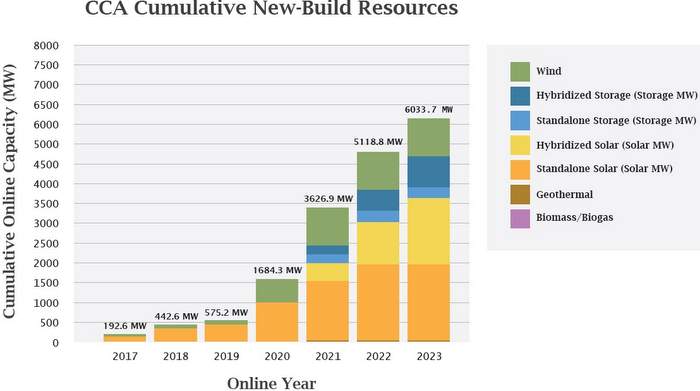 With record-breaking heat, rampant wildfires, and Public Safety Power Shutoffs threatening the stability of California’s power grid, energy storage is becoming an ever more important reliability resource. Aggregators are stepping up to ensure more storage is added to the grid with the signing of long-term battery energy storage contracts totaling 1,072 megawatts/3,847 megawatt-hours, quadruple the amount CCAs had at this time last year. About 72% of the total is co-located with solar generation facilities that will charge the batteries, allowing clean energy to be discharged at times of peak demand to boost reliability.

The clean energy projects are located in 21 California counties (up from 19 in 2019), from Humboldt County in the north to Riverside County in the south, as well as in the states of Arizona, New Mexico, and Nevada. Several projects are already operating, while others will become operational between 2020 and 2023. A map of project locations and a list of contracts can be found here.

With several new CCA requests for offers currently underway and planned, the list of CCA long-term clean energy contracts is set to grow considerably in the coming year. Notably, a group of CCAs recently issued a joint RFO for 500 megawatts of long duration storage with a minimum of eight hours of discharge duration. CCAs are procuring long duration storage to aid in meeting California’s 2030 greenhouse gas reduction targets.

As of 2020, CCAs serve over 50 gigawatt-hours of load, representing 28% of the load in the service areas of California’s three main investor-owned utilities (Pacific Gas & Electric, San Diego Gas & Electric, and Southern California Edison). Based on planned CCA launches over the next two years, CalCCA forecasts CCAs will serve 36% of IOU load in 2022.