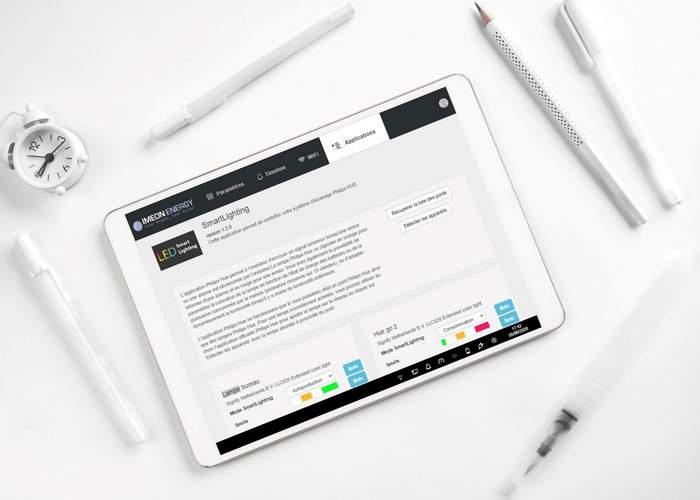 IMEON ENERGY is a French manufacturer of solar hybrid inverters that also develops software solutions to reduce the cost of kWh generated by solar installations with storage. The idea is to make customers more conscious of energy autonomy. The company’s latest innovation in that realm is a neat concept: The “LED Smart Lighting” application allows IMEON inverters to interact with the smart lights from Philips Hue range of products.

What is the point of having a solar inverter communicate with the lighting in a home?

The objective of this application is to send information using light, to encourage owners of IMEON inverters to optimize energy savings by adapting their electricity consumption habits.

The IMEON team wanted to find other ways to transfer messages to users in real time, in a non-intrusive way, without them needing to login to the monitoring platform.

By making the user aware of the times when electricity consumption is elevated as well as the times when the solar installation with energy storage is capable of high energy output, IMEON enables the user to slightly adapt his consumption habits in order to maximize the energy savings. As mentioned above, the impact of such awareness can result in a 10% reduction in electricity consumption, allowing the users to increase the energy autonomy of their homes.

The “LED Smart Lighting” application allows the IMEON inverters to communicate with the Philips Hue smart lights to discretely send information to the user via light signals, for example:

All the parameters of the application can be modified by the user via the IMEON OS. ONE interface. The “LED Smart Lighting” application introduces “Smart Dimming” feature which allows the inverter to change the brightness of the Philips Hue lamps in function of the level of sunlight.