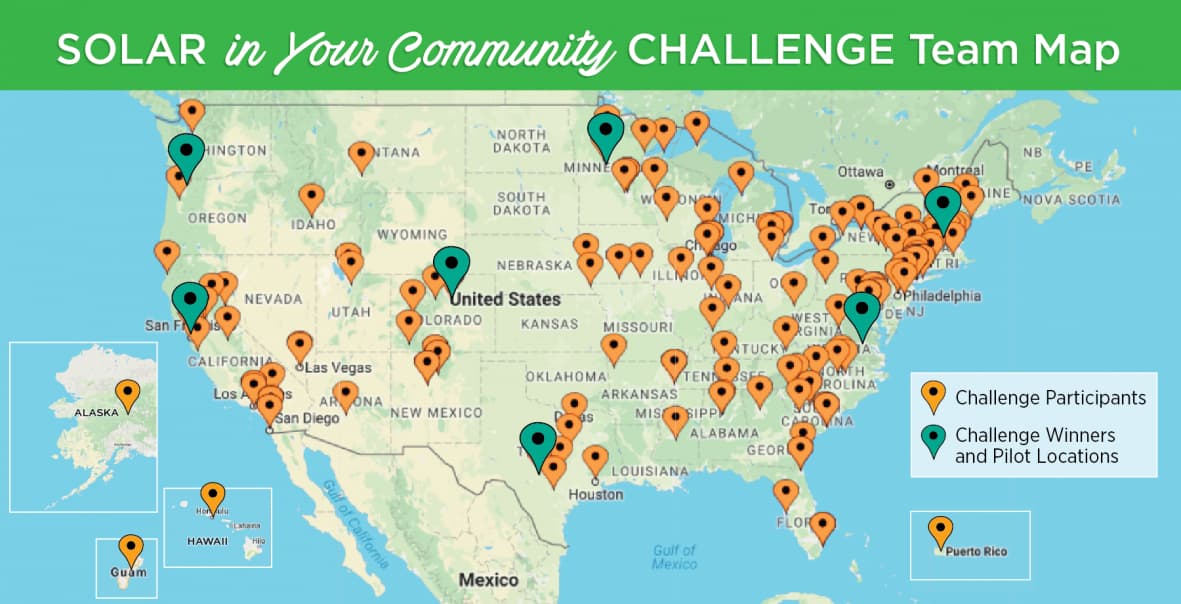 The Solar in Your Community Challenge is an awesome $5 million prize competition sponsored by the Department of Energy’s Solar Energy Technologies Office to incentivize the development of new approaches to expand access to solar energy. This year’s competition (from May 2017 to October 2018) resulted in some really cool approaches to improve solar access for nonprofits, faith-based organizations, state and local governments, and low- and moderate-income communities.

Below are the winners and some of our favorite runners up that were also recognized.

CARE was led by the Denver Housing Authority (DHA), which developed, owned, and operated off-site solar arrays to power DHA’s multifamily affordable housing buildings. As the guarantor of the power purchase agreement, DHA was able to ease financiers’ potential concerns about lending to projects comprised of LMI households. DHA worked with Xcel Energy, the local utility, to develop the projects and apply the savings to the energy bills of LMI residents in DHA’s buildings.

The team installed 2 MW of solar that benefited 764 LMI households, saving them approximately 20% on their energy bills, or nearly $3 million in savings. The team also went beyond the requirements of the challenge and provided hands-on training to 51 low-income individuals. Partners included GRID Alternatives, Ensight Energy, and SolarTAC.

This team was led by the Rural Renewable Energy Alliance and created a business model that works with local community action agencies to help LMI households. For this project, community action agencies (CAA) helped identify households that can participate in community solar developed under this effort and deliver savings to LMI households. They used the same qualification metrics and delivery mechanisms as the federal Low Income Home Energy Assistance Program (LIHEAP) to provide benefits to those LIHEAP cannot reach due to limitations in funding. This team worked to fill that gap.

The team deployed seven solar facilities—five throughout the Leech Lake Nation in rural Minnesota, one rooftop installation on a community housing organization in Duluth, and one in rural Vermont on the property of a CAA. Overall, 107 households benefited from the project and, on average, saved 22.3% of their utility bill.

The Kerrville Area Solar Partners were led by the Kerrville Public Utility Board (KPUB), which implemented power purchase agreements for four community solar projects on land leased from local nonprofits. KPUB developed a new rate structure so that it receives 100% of the solar production, then allocates the output to both the LMI residents and nonprofits hosting the systems. The projects provided 3.72 MW of solar and benefited 51% LMI households and 49% nonprofits.

KPUB’s relationship with the anchor nonprofits enabled the utility to secure lower-cost financing and competitive land lease rates. KPUB worked with the solar developer to monetize tax incentives that the utility and the nonprofits could not, providing additional financing for the projects.

The team partnered with the Texas Department of Housing and Community Affairs to use its pool of prequalified LMI households, reducing the soft costs of customer acquisition. The program benefited 302 LMI households and, on average, saved them 14% of their utility bill. Partners also included Schneider Engineering, RES Americas, and NextEra Energy.

This team was led by Sustainable Northwest and created a coalition of rural community leaders who are advancing the use of community solar on public facilities. The team leveraged the Oregon Clean Power Cooperative, which helped them raise funding from state residents and local investors, to build a solar installation on a nonprofit site that the cooperative would own. The nonprofit would benefit from reduced energy rates while members of the cooperative would receive a return on investment. This model is the state’s first renewable energy structured cooperative.

The team installed 120 kilowatts (kW) at four nonprofit sites—Hood River Public Works, Hood River Health Department, Lake County Library, and Saving Grace Animal Shelter—saving them an average of 17 percent on their utility bills. The team plans to deploy 3 MW of community solar by the end of 2030. Partners included a coalition of rural communities in Hood River, Lake, and Douglas Counties.

This team created a financing alternative that leveraged the Episcopal Church Building Fund (ECBF), a church extension fund, for two solar projects in Richmond, Virginia: a church and a parochial school. Most major Christian denominations have a church extension fund, which raises and manages funds to provide loans to affiliated churches so they can finance building projects.

The church entered into a long-term power purchase agreement with a Virginia-based investor to realize the benefits of the solar investment tax credit. The ECBF was the financial guarantor for the project, supported by the diocese of Virginia. The ECBF also provided the sites with a preapproved, long-term, low-interest loan for the host church to purchase the system, following the 60-month Internal Revenue Service compliance period.

The team installed 350 kW and plans to install just over 3 MW to serve 14 nonprofits and save them, on average, 25% of their electricity bill. The team is planning projects in New Jersey and California and has a longer list of interested parties. Partners included Performance Solar, Episcopal Church Building Fund, St. Stephen’s Episcopal Church, and Trinity Episcopal School.

Local Power (Grass Valley, CA) – This team created a solar thrift store where individuals can donate their used PV system equipment for a tax deduction. That equipment can then be resold for much less than the cost of new system components, reducing the cost for others to go solar.

SunShares VEIC (Burlington, VT) – This team developed a program where community solar subscriptions are tied to an employer, who passes the benefits on to employees. Employees pay for the energy they use through payroll deductions, and the employer sends those funds to the energy system owner.

Solar Pioneers (Brooklyn, NY) – This team increased local education and improved customer acquisition in two low-income communities, creating a training curriculum and empowering youth with the knowledge to be community ambassadors for solar. They installed 307 kW of solar.

RE-volv (San Francisco, CA) – This team enables nonprofits to go solar through an affordable lease financed by a crowdfunding-led revolving loan fund. They trained more than 250 “solar ambassadors” and raised $330,000. All the energy from these projects benefit LMI, saving an average of 25% on their utility bills.

Thrifty Community Solar Barn Raising (Staunton, VA) – Barn raising is a Mennonite tradition, which the team leveraged to develop PV systems. To prove their model’s ability to scale solar installations for rural communities, this team worked with the national network of Mennonite organizations and facilities, and partnered with the state’s largest solar developer. The team installed 172 kW and engaged nearly 200 people.