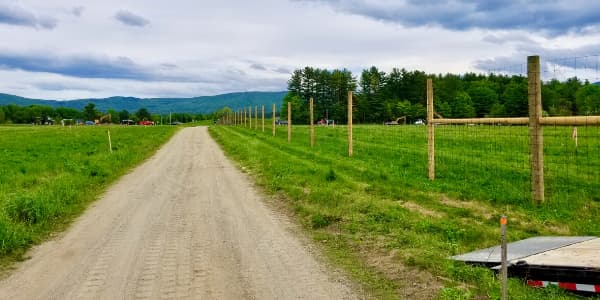 Vermont Public Power Supply Authority (VPPSA) and Encore Renewable Energy announced that construction has begun on a new solar array along Route 100 in Morrisville, on land currently utilized for corn silage. Encore is evaluating the potential for establishing pollinator-friendly wildflower groundcover to provide support for the bees, butterflies and other creatures that are critical to the overall health of our ecosystem.

Lawrence Brook Solar, the second project developed under a partnership formed in 2018 between VPPSA and Encore, will be sited on property owned by Morrisville resident Jeanette Davis. The new 2.2 megawatt (MW) array will generate income for Ms. Davis while allowing her to maintain ownership of the property through the duration of the 25-year lease agreement.

“Encore Renewable Energy has been a true partner in helping me to secure a lease revenue that will allow me to continue to live on the land that has been in my family for 40 years. I am looking forward to welcoming my new silent solar neighbor,” said Ms. Davis.

“Solar power has never been cheaper. We’re leveraging the low cost of this power to deliver the lowest cost renewable energy possible for these municipal customers,” said Encore Founder and CEO Chad Farrell.

The output is projected to fulfill Morrisville Water and Light’s distributed generation requirement to comply with Vermont’s Renewable Energy Standard (“RES”). Enacted in 2015, the RES requires Vermont electric utilities to supply increasing amounts of renewable energy. A portion must be purchased from distributed generators, including in-state solar arrays.

This project is the second of a 10 MW portfolio that VPPSA and Encore Renewable Energy are building together. Under the partnership, Encore performs all design, development, financing, and construction of solar projects. VPPSA manages the resulting electric generation, and maximizes its value for its member utilities’ communities.