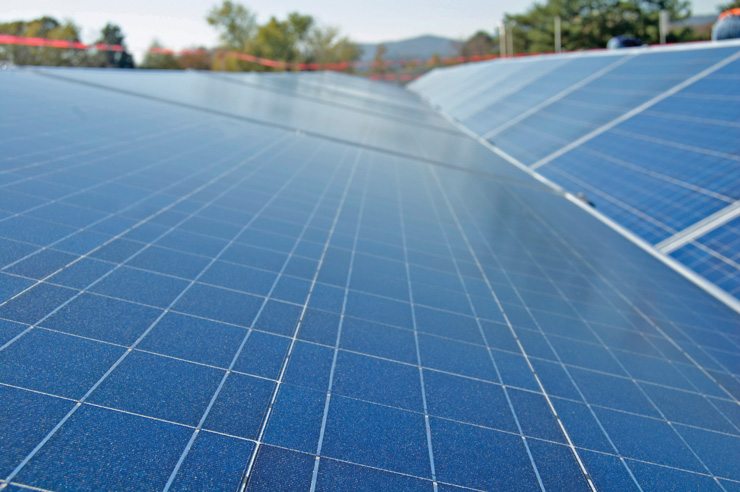 Parallel architecture allows for voltage regulation at the module level, which has a variety of implications.

All PV power generation starts with a simple cell. One is wired to the next, then to the next, and then those are grouped into modules and then into panels and then strung together and so on. So, what happens when you change how that single cell exists within the system? How much else can you change downstream?

This is the question Ten K Solar has been asking and answering since 2008. To achieve the grandiose goal of the solar industry — to pull the most energy out of a system, reliably, for the lowest costs over the life time of the system— Ten K started at the cell and wired it in parallel instead of serial.

“Every cell is wired to both its north-south and east-west partner,” says Julian White, director of marketing and product direction. “So our module wiring from cell to cell looks like a true matrix. Parallel architecture is the core of what is happening.”

Let’s start with the obvious. In a 60-cell module, 20 cells are serial connected in one direction, which ties them all together. Wiring cells in parallel adds redundancy into the system, and where there is redundancy there is better reliability.

“Once you free the cell and break that dependence, you now allow each cell to operate at its best potential without being hindered by the cells around it,” White says.

Ten K then wires the modules in parallel (there’s that word again) to the AC bus. Here, just like at the cell level, no one module is dependent on the others for performance. This eliminates module-to-module mismatch, shading issues, etc. The goal of every decision is layers of redundancy.

“We wanted to eliminate any impact one module can have on the others in the string,” White says.

Any shading or soiling or degradation of a connection — all of those issues are contained at the cell level, rather than affecting all of the other cells on its string. But really, these benefits are the low-hanging fruit.

Parallel architecture allows for voltage regulation at the module level, which has a variety of implications. For one, lower voltage inherently improves safety, and Ten K’s system never runs higher than 20 volts within the module.

A lower voltage can change other materials used. For instance, Ten K uses an aluminum back sheet instead of plastic or glass on glass. Aluminum adds strength to the module without needing thicker glass or a thicker frame, and it also allows for a larger form factor — Ten K’s APEX is a 200 half-cell module that compares to a 100-cell conventional module. 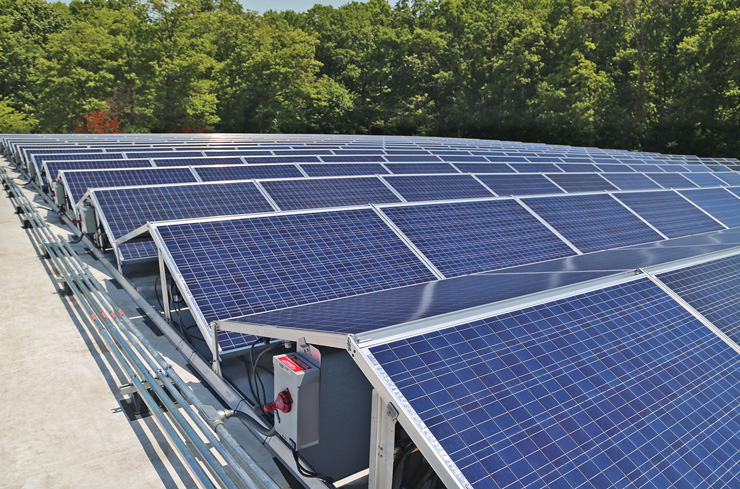 Ten K’s DUO system can pack a ton of modules on the roof because of parallel cell shade tolerances.

But aluminum also has high water impermeability because of its quality seal. So, this effect (aluminum back sheet) then teams up with its cause (paralleled architecture) to create a lower module degradation rate — about 0.2 percent annually over the 25-year warranty compared to a conventional 0.5 to 0.7 percent degradation rate. Where an average module might be at 82 percent of its original rating toward the end, a Ten K module will be at about 92 percent. This can equate to about a 6 percent total increase in system production over that span.

That aluminum backsheet also can serve as return conductor and a fail-safe in the event that something happens to pierce the module. It actually captures any free flowing current that may otherwise be dangerous and pull it back into the circuit, and the module actually will keep on working. To prove this point, Ten K literally drove a stake into a module on its roof. The wounded module is still generating energy up there to this day.

With cells now wired in to operate independent of all their friends and at their own optimal performance, White says cell mismatch is eliminated. Suddenly, the system doesn’t need an inverter to handle maximum power point tracking (MPPT) as long as the voltage is regulated.

“The module in the string doesn’t need to be modulated from a voltage stand point,” he says. “MPPT is essentially happening in the module. I’m no longer trying to track a voltage as it swings based on environmental conditions. The inverter is just going to see a fixed voltage.”

Ten K’s Module Integrated Electronics boost the DC module voltage from 20 to a fixed ~60 Vdc, and each module then pumps as much current as it can. In addition, Ten K doesn’t have to meet the NEC 6090.11 arc fault circuit interruption requirements because the entire system is under 80 volts, which is the threshold in the code.

Ten K chose to regulate voltage at the module level, and at 60 volts, for two reasons. The first is National Fire Protection Association (NFPA) guideline 70E for dry conditions that says 60 volts and under is considered safe because it can’t penetrate skin. The second reason is that regulating voltage immediately and without the help of an inverter makes the Ten K system easily compatible with storage.

“The whole system is designed and ready for DC-coupled storage added directly to the DC bus,” White says. “You don’t have to change inversion solutions, and you don’t have AC roundtrip losses.”

Adding in additional electronics at the module-level, of course, brings its own unique risks and new points of failure, but the Ten K team believes this risk is neutralized. The component in question within the module is the switched-mode power supply, which is what’s modulating, changing and boosting the voltage from 20 volts out of the module to the 60-volt target. But it is a component that comes from the automotive industry and has known-failure rates. And here again Ten K wires those devices in parallel, and even though each module only needs four switched-mode power supplies to run at full capacity, six are wired in.

The ripples from the paralleled cells go beyond the module itself. That aluminum back sheet helps to tilt modules at a steeper angle, which the company leverages in both its REFLECT and DUO product lines (the steepest module sits at 26 or 28 degrees).  The REFLECT system also has a wind screen with a reflective laminate that boosts total irradiance hitting the module. This is a feature you might not want with a conventional system because nonuniform irradiance on a module in a string will limit performance as the system seeks uniformity by running at the lowest performing output.

Ten K’s most popular system, DUO, takes advantage of the parallel cell’s shade tolerant benefits to pack as many modules on the roof as possible. Two modules are placed together in a dual tilt configuration.  In order to maximize total density, the modules are packed so tight they actually partially shade each other in winter months. The trade-off is so much additional energy production through the year that it more than offsets the shading losses.

In space constrained scenarios like commercial flat roofs or more populated ground-mount scenarios, kWh per sq ft and dollars per kWh are hugely important, especially as silicon has fallen in price.

“You might as well get as much silicon on the roof as possible and amortize all the fixed costs of the project,” White says. “This should provide a better dollar per kWh because you have a lot more kWhs to sell.”

White says, depending on the comp, this can lead to a 30-60 percent increase in power density relative to conventional racking systems.

“The whole system based on the known degradation and failure rates — each component, cell, module — it’s all designed so you shouldn’t actually have to do any DC maintenance for the 25-year life of the system, and you’ll get all of the warranted power out of those modules for 25 years,” White says.