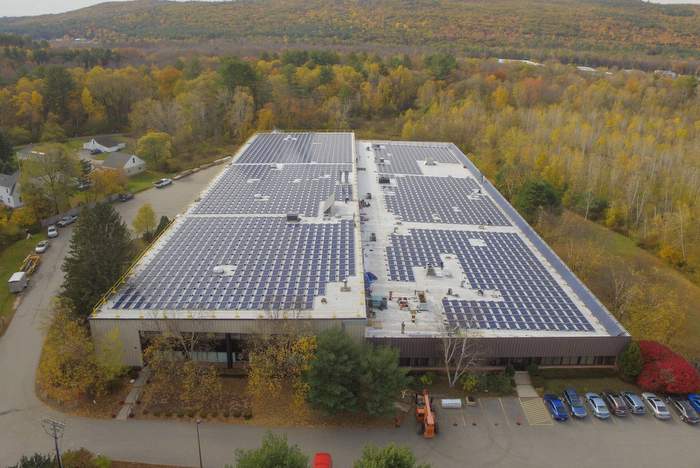 With the recent expansion of its solar array, Filtrine Manufacturing Company now powers its entire operation with solar energy. The 793.1-kilowatt rooftop array installed this fall includes 2,234 solar panels and generates over 900 megawatt hours of solar electricity per year. The system was installed by ReVision Energy.

A 30-kilowatt array installed in 2013 includes 120 solar panels and supplies 35,000 kilowatt hours on an annual basis. Combined, the arrays offset Filtrine’s entire electric load and represent one of the largest solar projects in the Monadnock Region in New Hampshire. After a five-year payback period, the company will generate solar power at no cost for decades to come.

“Filtrine, which was founded in 1901, has always been concerned about sustainability,” according to President Peter Hansel. “Our products promote the wise use of water both for drinking and process applications, and we are committed to producing them with the least impact on our environment.”

Five years ago, Filtrine contracted with students from Antioch University New England to evaluate its environmental footprint. The findings provided the manufacturer with a baseline from which to inform its decision-making and to evaluate its progress.

A one million BTU wood chip boiler installed two years ago by Froling Energy reduced the company’s reliance on oil by 90%. Other improvements included the installation of solar hot water collectors, insulation, and LED lighting, in addition to the purchase of energy-efficient machinery.

The solar arrays will offset 468 tons of carbon pollution annually, which is equivalent to taking 90 cars off the road or the carbon sequestered by 500 acres of forests. The carbon offset is also equivalent to the annual consumption of 984 barrels of oil or the annual electric load of 74 homes.