Florida Power & Light Co. unveiled a new solar-plus-storage system last week that they say will be the first in the country to fully integrate battery technology with a major solar power plant in a way that increases the plant’s overall energy output. By incorporating this new technology into the FPL Citrus Solar Energy Center, a solar power plant that was built in 2016, FPL expects to increase the amount of solar energy that the plant can deliver to the electric grid by more than half a million kilowatt-hours a year. 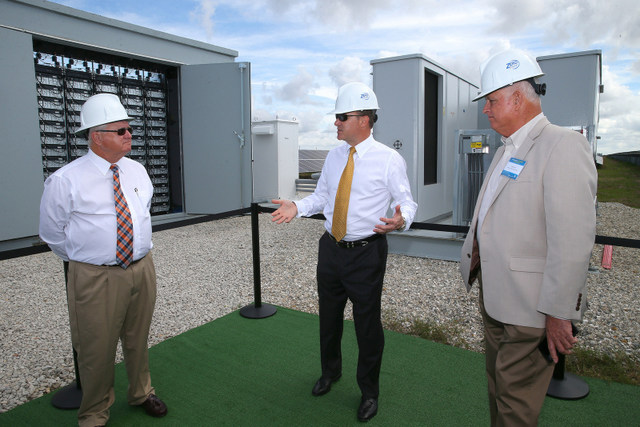 The new system features a 4,000-kilowatt/16,000-kilowatt-hour storage capacity comprised of multiple batteries integrated into the operations of the FPL Citrus Solar Energy Center. In addition to enabling the plant to provide more solar energy to the grid, the battery system is capable of storing the energy and dispatching it to the grid at a later time.

This technology has the potential to harness millions of kilowatt-hours of solar energy a year that would normally be lost and improve the predictability of solar energy, which naturally fluctuates with the sun’s availability. Increased predictability enables FPL to more efficiently dispatch other power plants, helping save customers on fuel costs.

How the new system works

The new solar-plus-storage system unveiled today is the first large-scale application of “DC-coupled” batteries at a solar power plant in the U.S.  An advantage of DC-coupled batteries is the ability to harness extra energy that a solar plant generates when the sun’s rays are the strongest.

During these optimal operating periods, a solar plant may generate more power than its inverters can process, resulting in some energy inevitably being lost – or “clipped” by the inverter. Unlike other batteries, a DC-coupled system can capture this extra clipped energy, thereby increasing the amount of energy the plant delivers to the grid.

The additional solar energy and the increased predictability afforded by battery storage can enable FPL to more efficiently dispatch other power plants, helping save customers on fuel costs.

FPL is in the midst of one of the largest solar expansions ever in the eastern U.S. with more than 520 megawatts – 3.5 million new solar panels – added in the last two years alone and nearly 300 megawatts more scheduled to enter service by March 1. From 2016 to 2023, FPL expects to install a total of more than 10 million solar panels. These advancements continue to improve FPL’s carbon emissions profile, which is already approximately 30 percent cleaner than the U.S. industry average.

Moreover, FPL’s eight newest solar plants combined are projected to generate more than $100 million in net savings, over and above the cost of construction, for FPL customers. Investments like these help FPL keep rates low for customers over the long term. Today, FPL’s typical 1,000-kWh residential customer bill is lower than it was more than 10 years ago and approximately 25 percent lower than the latest U.S. average. (FPL rates are decreasing again on March 1.)

FPL is the largest generator of solar energy in Florida with 10 major solar power plants and numerous other universal solar installations, totaling more than 635 megawatts of capacity, including: