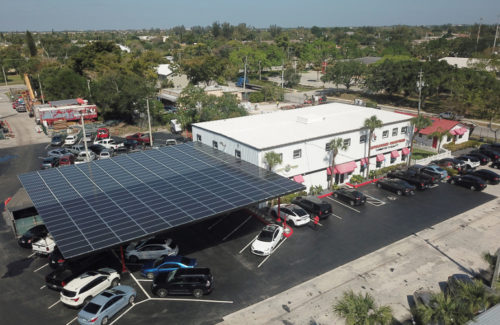 “With all these solar solutions in place, we’re producing 100 percent of our main office’s energy needs, and that’s a doable goal for so many businesses that own their office and industrial locations,” said Rob Kornahrens, CEO of Advanced Roofing and AGT. He noted solar carport prices have dropped about 50 percent in the last five years through new technology and the company’s customized solutions and designs.

As electric vehicles’ (EV) popularity grows, Advanced Roofing – one of the nation’s “greenest” roofing companies – is also positioned to expand its role in the EV charge station market with a partnership with national EV charging industry leader ChargePoint. Already benefiting from electric vehicles’ energy savings, Advanced Roofing has added a Tesla Model S, a Tesla Model X and a Chevy Volt to its fleet.

Multinational corporations, hospitals, and other institutions took the lead in solar carport use during the last five-years, said Kornahrens, whose company has installed a total of more than 245 Megawatts of rooftop solar arrays and solar carports thought the United States – including two solar carports as large as six football fields for Lockheed Martin in Florida. With solar carport installations rising steadily nationwide since 2010, “many smaller companies that lack the rooftop space for a solar array are finding solar carports very practical.”

“Business owners with a deep commitment to sustainability are increasing solar carport demand here and statewide, taking advantage of the current economic and tax policy window,” Kornahrens said. “It’s a welcome benefit for their employees, whose cars stay cooler and protected from sunlight, and who enjoy the security of lighting systems installed under a carport’s solar panels.”