The success of widely-adopted technologies is often tied to standardization. From video formats to the Internet, and now to the energy grid, the establishment of standards reduces the cost and complexity of systems and enables broad adoption at a global scale. With standards, distributed energy — and the solar sector in particular — can build upon the competitiveness it has attained, sustain economies of scale required for widespread adoption, and compete on an even footing with other forms of energy generation.

The core mission of the SunSpec Alliance, founded in 2009, is to accelerate the growth of distributed energy by specifying de facto communication standards (information models, data formats, protocols, system interfaces, and other artifacts) that enable distributed energy systems to interoperate with system components, software applications, financial systems and the smart grid. The first de facto standard published by SunSpec in 2010 was SunSpec Modbus. The goal of SunSpec Modbus was to create a common language that all distributed energy component manufacturers could use to enable communication interoperability among PV system components.

Installers have never needed to deal with communication requirements at this level, but IEEE 1547 is being adopted and implemented by states all over the country (see above map), so you should get used to dealing with it or your interconnection lead times could lengthen.

History: With the buildup of the PV market and the need to reduce the costs of configuring and maintaining PV monitoring systems, SunSpec Modbus enjoyed significant adoption by the leading inverter manufacturers and fleet operators of the day. Some of the earliest major end-user design wins were with companies like Solar City, Sunrun, Sun Edison and First Solar. The technology also attracted the attention of research labs like EPRI, Sandia, NREL, CanMet (Canada), AIT (Austria), RSE (Italy), FREA (Japan), KERI (Korea) and many others around the world that were inventing and developing the so-called “smart inverter.” 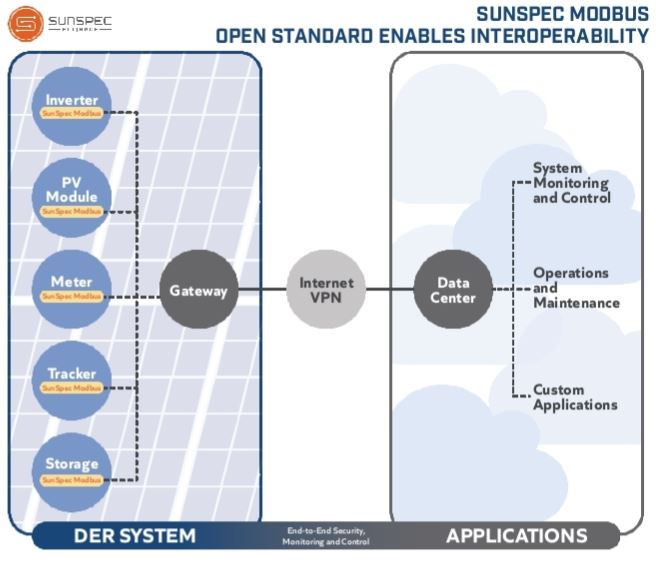 During that period, SunSpec struck up a partnership with the Zigbee Alliance, which was preparing to divest its “SEP 2” (Smart Energy Profile 2.0) technology and make it a TCP/IP-based Internet standard. SEP 2 needed a way to talk to distributed energy resources (DER) and, consistent with what many people thought was a crazy policy, SunSpec donated its SunSpec Modbus information models for inverters and meters to the standard. As a result, SunSpec Modbus and IEEE 2030.5-2018 (previously known as “SEP 2”) share common semantics, which is to say they speak the same language.

How SunSpec Modbus works: SunSpec Modbus defines common parameters and settings for monitoring and controlling DERs and their capabilities, such as voltage regulation, setting power factor and power export limiting. It also structures data to enable interoperability among system components made by different manufacturers.

By leveraging the Modbus protocol, a widely adopted language for industrial electronic devices that has been used since the 1980s, SunSpec has been able to extend the SunSpec Modbus interface to cover all solar inverters and many other commercially available DERs. And with the Modbus physical interface being built into approximately 80 percent of installed DER devices, the addition of SunSpec Modbus support to the basic Modbus interface is a straightforward and easy path for product developers.

Where it’s implemented: In 2018, the IEEE 1547 standard, the U.S. national standard for all DER as established by the Energy Act of 2005, was enhanced to add smart inverter functions and the requirement for data communication. SunSpec Modbus, IEEE 2030.5, and IEEE 1815 (another protocol that is semantically compliant with SunSpec Modbus) are listed in the standard as options for complying with IEEE 1457 requirements — which means that solar installers need to get comfortable with communication protocols.

Today, SunSpec Modbus is widely adopted by manufacturers as an accepted protocol for interoperability among DER system components. As IEEE 1547 sets precedent for regulatory standards surrounding data communication for DERs, SunSpec Modbus is being adopted on a global scale. In addition to the United States, Poland and Denmark now both reference SunSpec Modbus in their national grid codes.

IEEE 1547 is implemented state by state. Hawaii went first. California Rule 21 is actively adopting it now (by writing it into the regulation). Other states have already implemented (see graphic on 24). Eighty percent of all IEEE 1547 communication requirements are likely to be fulfilled by SunSpec Modbus.

To enhance interoperability and improve the end user experience with DER communication protocols, SunSpec offers a communication interface certification program that ensures all product implementations support a common set of functions and capabilities. In the U.S., SunSpec Certified products are most commonly validated to IEEE 1547 requirements.

By referencing IEEE 1547 requirements, the SunSpec Modbus Specification and Certification mark offers installers assurance of compliance with national regulatory standards for interconnection and interoperability. More than 100 product lines have been SunSpec Certified so far and more are on the way. To see which products carry the SunSpec mark, please check out the SunSpec Certification Registry on the SunSpec Alliance website. While SunSpec is best known for serving manufacturers and large fleet operators, we have a lot of great content and freely available resources for installers and others involved in building the distributed energy market place.