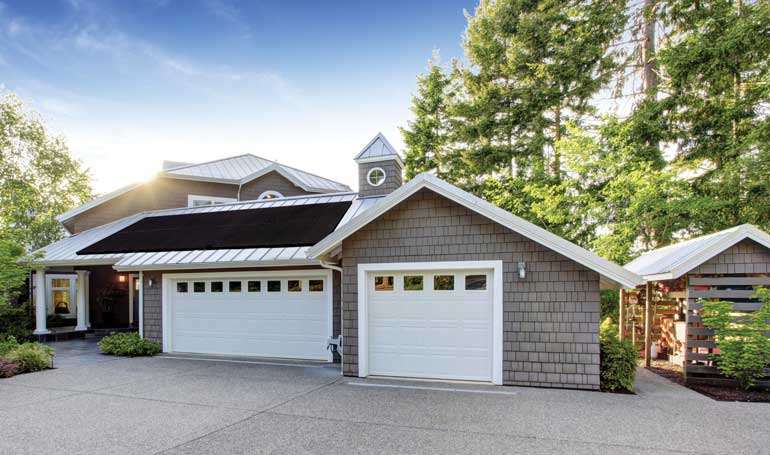 Solaria uses a direct contact between cells to reduce power loss as well as achieve an all-black look.

For all of the intrinsic value of solar, selling it on a wide-scale to homeowners might depend more on stuff like emotional appeal and aesthetics. This is driving the influx of black PV panels coming onto the market. LG’s NeON series comes in black. Panasonic just released all-black versions of its popular HIT panels (as we noted last issue). And so on.

A new entrant into this space is Solaria, a technology company that has been developing its technology over the last decade to commercialize a breakthrough product for the industry. As Chinese panels continued to drive down prices in utility-scale projects, that market became less of a focus.

Looking at the market, Solaria CEO Suvi Sharma thinks residential installs are the next big opportunity for high-efficiency, aesthetically pleasing panels that have residential applications in mind from the start.
“If you look at the Chinese model of panels where you basically make two different sizes that you stuff into different channels, that worked when the market was small, but now the market deserves its own product and focus.”

Solaria took its core technology – solar cell cutting, handling assembly and automation and configured a module and design to do two things:

“Produce significantly more power than a standard solar panel using the same bill of materials and, just as importantly, provide a much better looking panel,” he says. “With the industry maturing, those attributes will become more important. We want to break through from the early adopters in the mass market.”

Right now, Solaria’s residential solar capacity is still on the smaller side. Between its line in Fremont, Calif., and its line in South Korea, Solaria is working on adding additional capacity to meet growing demand.

Conveniently, Solaria’s strategy for designing an efficient panel naturally created a sleek-looking product. The Solaria formula in a nutshell is to cut solar cells (mono PERC) into five strips and then overlap each of them instead of interconnecting them with traditional ribbon wire. The cell architecture of a traditional module leaves dead space between each cell, whereas this overlapping structure creates a uniform, continuous string of strips as well as the aesthetic bonus of covering up the typically visible busbars.

“All of the active areas of a cell are exposed. Busbars on a typical module shade about 3 to 4 percent of the module and cell, so we eliminate that through the overlap mechanism,” he says. “By creating a direct contact between one cell and another, we get better electrical performance because we don’t have the traditional losses associated with ribbon wires.”

Why high-efficiency modules are the best value for installers, homeowners

Part of the value from increasing system efficiency within the module architecture itself — and wiring in a combination of parallel and series — is also reducing the need for efficiency-boosting or shade-mitigating MLPEs. You may still want to incorporate optimizers in certain applications, but the need is reduced.

Add all of that up, Sharma says a Solaria panel (60-cell, 330 Wp) should be expected to produce 15 to 20 percent higher power than conventional panels using the same cells and materials to pair with that all-black appearance. The price point for Solaria is higher than a conventional Chinese panel, but priced below a high-efficiency SunPower back-contact panel.

Beyond improved aesthetics, simplicity is another big factor in the residential market. For that reason, Sharma wants to put Solaria on the path toward smart AC modules.

“How does solar become truly mainstream? The installation of the system needs to be simplified more and more. Plus, it’s a complex sell. The broader we can make the installer base, where more electricians get into it, the bigger it’s going to grow. We want to simplify the installation and that’s where we see the opportunity for integrated AC modules.”

Be on the lookout for more news on that front from Solaria as it tests out concepts with various microinverter manufacturers until it feels comfortable enough to offer an integrated product and stand behind the warranty.

Key to Solaria’s solution is the mono PERC cell. CEO Suvi Sharma explains his reasoning behind that choice.

“You typically get about 1 percent absolute improved power today from a standard mono cell, but the roadmap to improve that power is better with mono PERC,” Suvi says. “There are more dials to play with in terms of efficiency. Not only does mono PERC have higher power than a traditional mono cell, but the difference is going to grow over time. Could become 2 percent absolute over the next 18 months.”

“One issue with PERC is its light-induced degradation [LID]. The PERC manufacturers have worked on that a lot over the last 18 months. The LID is similar to mono cells now. Sometimes in multi PERC there tends to be more LID.”

“Mono PERC is growing in market share because it’s an add-on. If you already have an investment in a mono cell line, you can leverage it for mono PERC as opposed to new cell contents like heterojunction and bifacial, which require a fundamentally new investment in equipment. We believe that within three years probably, all mono cell capacity is going to be converted to mono PERC.”