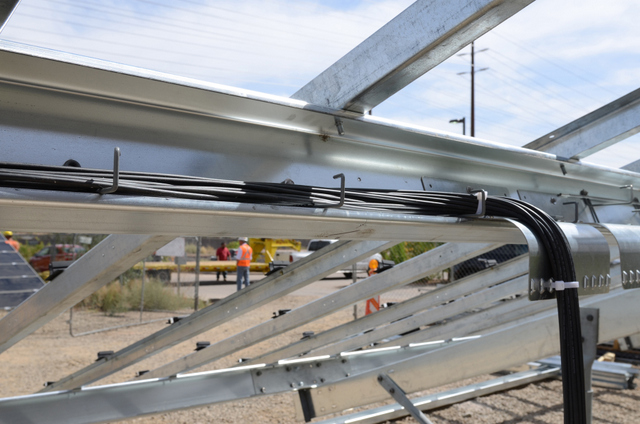 Back in 2010, Snake Tray decided to install a PV system on its own roof. At that point, Snake Tray had been a manufacturer of trays for other industries for many years, with no ties to the solar industry. But after seeing a PV system installation up close, owner Roger Jette believed their trays would be a perfect solution for commercial rooftop cable management.

Tray is an open-air solution. Installers typically meet electrical code compliance by stringing cables through conduits, which protect them from harsh environmental conditions like temperature fluctuations and direct UV. Would the tray be up to code?

The tray most certainly was up to code, but most of the solar industry wouldn’t have guessed so.

“In 2008, there was a significant code change that said you do not need to just use conduit for solar panels anymore,” according to Eric Sadler, engineering sales manager for Solar Snake Tray. “It explicitly permitted exposed wiring methods, and consequently, we started telling our customers that this method is easier, faster and you can do this right now.”

Since then, it has been about shifting perceptions for Snake Tray ­— a shift that seems to be happening. The company’s solar business grew steadily from that first self-install, and now solar pathways are the company’s largest portion of business, with a focus on both commercial rooftop and utility scale. The code was even amended further in 2014 to explicitly allow cable trays.

Traditional conduit requires cables to be sized larger, which can add cost. Snake Tray’s patented open design allows the cables to be securely managed while allowing for better airflow so cables can operate at higher capacity. Trays connect together with a single connector for a 15-second bonded attachment tray-to-tray.

The tray system costs more than a conduit, but Sadler says the value of the tray lies in its install speed, design flexibility and long-term accessibility.

“We are about labor savings and ease of installation,” he says. “You have pairs of wires coming off of every string, and in order to do it the old way, you had to T into the conduit and pull the cable. Snake Tray is an open tray, so you can start anywhere in the tray without having to T off.”

Bending conduit requires  planning and a tool; whereas trays can be bent using your hands and knees. After forming to the necessary shape, the tray is simply attached to the mounting system via Tek screws or bolts. Built-in mounting rings allow for a variety of mounting options.

“Between the ease of aggregating the strings and the ease of making the turns, it just is so much faster,” Sadler says. “Our rule of thumb is Snake Tray takes approximately 60 percent of the time it would have taken to do a job using the traditional methods.”

Those estimates can vary a bit above or below that mark depending on how the tray needs to be mounted. When the racking allows regular attachment, the value can be better.

The open-air style of the tray provides great value in the wide open spaces of a utility-scale installation. Typically, cables are buried under ground in those applications, which means digging trenches. The gains in speed and efficiency with a tray vs. a trench solution are obvious, but a secondary advantage is how the exposed cable is now much more accessible for maintenance purposes for the life of the system.

However, many installers still prefer the standard, underground method for both cable protection and safety code reasons. Sadler believes both concerns aren’t really an issue. On the exposure side, the cables are often positioned underneath the panels, and they are UV-rated.

“They might fade in color, but they won’t degrade with UV exposure,” Sadler says.

As for the code, solar projects are to be made “not readily accessible,” which could mean up on a rooftop or perhaps behind a fence in the middle of the desert where only authorized personnel have access. This is how exposed wire methods meet the criteria, which at least means utility-scale installers shouldn’t shy away from the newer cable management method for either code or functionality-related reasons.

“For utility scale, we have solutions for fixed mounted and tracker plants, and we’ve become good at managing the string cables that come off all the panels, as well as the feeder cables, whether AC or DC, depending on if a company decides to use more inverters or combiners boxes,” Sadler says. 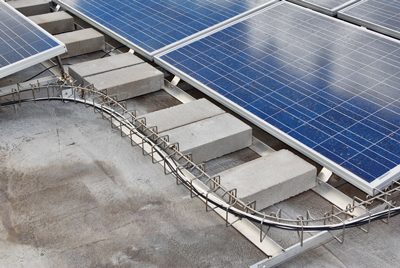 Trays can form to the necessary shapes by simply bending them with your hands or knees.

Below are the main Solar Snake Tray applications (with talks of a residential rooftop option coming down the road ­— stay tuned). The majority of these are made from a recycled steel that’s pregalvanized in the production line and then fabricated by bending, cutting and welding, and then finally treated with an industrial-strength powder coat finish.

There is a stainless steel option for high salinity environments like Hawaii.