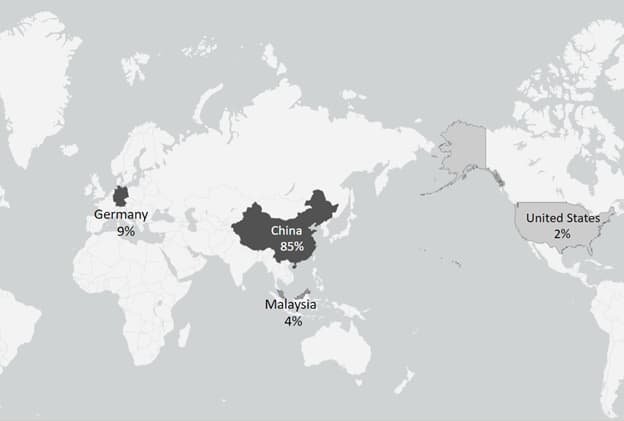 This was originally published by the Clean Energy Associates.

In recent weeks and months there has been a lot of press and discussion about the ethical sourcing of PV modules, specifically whether the solar industry is somehow tied to the use of forced labor. Since the 1930’s Tariff Act, the U.S. has banned the import of goods using forced labor. However, new legislation making its way through Congress in the U.S. would blanket ban the import of any goods from Xinjiang, China unless it is proven that no forced labor was used.

The proposed legislation in question, the “Uyghur Forced Labor Prevention Act” effectively declares anything and everything from Xinjiang guilty until proven innocent. Known more for its exports of tomatoes and cotton, approximately 50% of the world’s polysilicon, a key component in solar modules that use crystalline silicon solar cells, comes from Xinjiang, China – a region which many outside of China believe to use forced labor.

What is the Uyghur Forced Labor Prevention Act?

H.R.6210 – Uyghur Forced Labor Prevention Act is a bill proposed by representatives within the United States Congress that “imposes various restrictions related to China’s Xinjiang Uyghur Autonomous region, including by prohibiting certain imports from Xinjiang and imposing sanctions on those responsible for human rights violations there.” As stated on congress.gov:

“Goods manufactured or produced in Xinjiang shall not be entitled to entry into the United States unless Customs and Border Protection (1) determines that the goods were not manufactured by convict labor, forced labor, or indentured labor under penal sanctions; and (2) reports such a determination to Congress and to the public.”

Thanks to abundant, low-cost electricity, over 50% of the world’s polysilicon supply is produced in Xinjiang, China. Roughly 95% of all solar modules made today use polysilicon, which is the raw material for making a silicon ingot; the ingot is then cut into thin slices called silicon wafers, which become the solar cells that go into PV modules.

If the proposed Uyghur Forced Labor Prevention Act becomes law, U.S. Customs and Border Protection could disallow admissibility of goods (such as solar panels) if any component (including polysilicon) originates from Xinjiang, unless it is proven that no forced labor was used. However, proving that a Xinjiang production facility does not use forced labor is virtually not plausible today.

In essence, this bill would eliminate half of the world’s supply of a key solar module raw material to those importing to the United States. Although there is sufficient production of polysilicon outside Xinjiang to satisfy the polysilicon need for all crystalline modules for the U.S., supply chains today are not fully equipped to accommodate this.

Where Does the Legislation Stand, and Who Does It Impact?

Based on the overwhelming bipartisan support for this legislation and the Biden Administration’s stated plan to sign it, it is highly likely the Uyghur Forced Labor Prevention Act will be signed into law in 2021. Once passed, implementation could happen within 4 months, although U.S. Customs and Border Protection has the right today to halt the import of any goods suspected of using forced labor through the Tariff Act of 1930.

Perhaps as precedent, the U.S. announced on January 13, the import of all cotton and tomatoes from Xinjiang are now banned, effective immediately.

Although the legislation in question now strictly impacts imports to the U.S., similar legislation is being considered in Europe and is likely to follow in other countries and regions around the world as governments and companies take action and make buying decisions to eliminate forced labor practices and materials in the supply chain.

For those in the business of importing solar panels, the time to prepare and act is now. Here’s you can comply with the Uyghur Forced Labor Prevention Act

Nobody wants to source products that have forced labor, and it is recommended to take proactive steps now to avoid being impacted by this legislation when it passes. More importantly, regardless of the likely possibility that this new legislation becomes law, existing laws and codes of conduct already in place have established a solid foundation for taking action.

Here are steps you can implement today:

1) Sign the SEIA Pledge Against Forced Labor. The Solar Energy Industries Association (SEIA) has called on the solar industry and its members to sign a pledge opposing forced labor. Signing this pledge is the first step you can take as a good-faith gesture that you oppose forced labor.

2) Include No-Forced Labor Language in Your Code of Conduct and in Your Solar Procurement Contracts. According to a Fact Sheet issued by Customs and Border Patrol, one of the steps to support a determination of no-forced-labor is having a social compliance system; that can mean developing and actively maintaining a Code of Conduct for your organization, stating you do not support, condone, or do business with organizations using forced labor, and that you require your vendors to behave similarly.

Your employees should be trained about the company’s Code of Conduct and there should be enforcement mechanisms in place. Companies may have to show U.S. authorities that employees are familiar with the Code of Conduct, and that it contains provisions for filing grievances, bringing enforcement mechanisms, and other required protections for workers.

3) Require Your Solar Module Supplier to Have Similar Provisions. Customs and Border Patrol has sweeping authority to block goods it suspects contains any component that involves forced labor. Therefore, companies should require their PV suppliers to have similar Code of Conduct provisions in their contracts and require them to require their suppliers to have the same – all the way up the supply chain, so as to have a comprehensive document trail to present to Customs showing the entire supply chain is against the use of forced labor.

4) Move Your Solar Supply Chain Outside of Xinjiang. SEIA has already encouraged solar companies move their supply chains outside of Xinjiang. Although it is possible to completely source solar modules and all of their respective components for the US market from outside of Xinjiang, this may create a supply/demand imbalance for non-Xinjiang polysilicon, greater use of polysilicon that has a higher production cost, and result in a significant price hike for polysilicon, leading to a possible increase in the price (or slower decline in price v. time) of a PV module.

A further complication arises when polysilicon from other parts of China is used. A standard practice of ingot suppliers is to mix polysilicon batches from different sources without a clear separation. Even if most of the polysilicon used in your solar modules came from outside of Xinjiang, and only a tiny percentage used polysilicon from Xinjiang, the entire shipment could be halted by Customs.

Therefore, the final step is to implement a Full Traceability Audit of your solar supply chain.

5) Implement Full Component Traceability for Your Solar Supply Chain. As required in the certifications for everything from conflict-free diamonds and sustainable cotton to fair-trade coffee and organic produce, importers will likely need to hire a third-party auditor to demonstrate ‘full traceability’ – examining the entire production, refining, manufacturing, and assembly processes to ensure that no production hails from Xinjiang.

It isn’t enough that a solar panel’s wafers, cells and modules weren’t assembled in the region — a company will also have to demonstrate that even the base ingredient, the polysilicon, came from outside Xinjiang. Indeed, it may be necessary to show that the silicon metal that is a precursor to highly purified polysilicon is not sourced in Xinjiang.