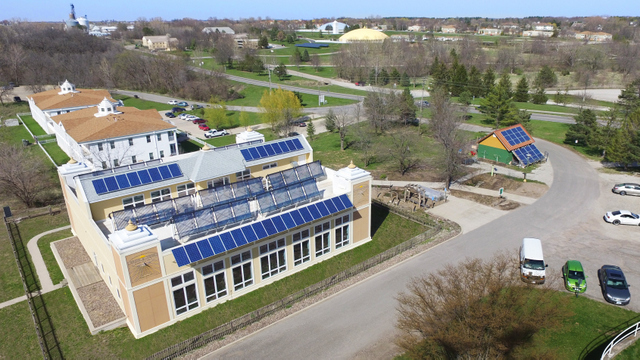 Iowa-based Ideal Energy is constructing a 1.1 MW power plant at the Maharishi University of Management (MUM) in Fairfield, Iowa, using the NEXTracker NX Flow integrated solar-plus-storage system. The project will be built on University land and, when completed, it is projected to be one of the largest solar-plus-storage power plants in the state, producing enough energy to cover nearly a third of the University’s annual electricity usage. In addition to those savings, NX Flow will use peak-shaving to significantly reduce MUM’s utility bill during high-demand times.

NX Flow’s energy storage system integrates battery, solar tracker, inverter, and software technologies to improve return on investment for owners of solar power plants. At the core of the system lies an advanced vanadium flow battery (VFB), which is DC-coupled with the photovoltaic array. With NX Flow, the battery charges directly off the array, enabling the battery to store “clipped” energy up to its capacity limit. Energy that has been lost to clipping can now be used to generate additional kilowatt-hours of revenue. Ideal Energy will also be installing NEXTracker’s award-winning smart solar tracker, NX Horizon, for decentralized active tracking.

“We’re excited to be a part of the solar project serving Maharishi University of Management and working to help further solidify Iowa’s spot on the renewable energy leader board,” said Amy Van Beek, cofounder of Ideal Energy. “When it came time to recommend a solar-and-storage solution, NEXTracker was not only the clear choice with its next-generation technology and trackers, but its customer-first approach is second to none, and the short product delivery lead times on an accelerated schedule were essential. We look forward to furthering Iowa’s promising solar future.”

With 37 percent of Iowa’s electricity coming from wind power, Iowa is no stranger to producing renewable energy. And, according to The Solar Foundation’s 2017 National Solar Jobs census, with an increase of 45 percent of solar jobs in 2017 alone, the state is expanding its clean energy production to include solar energy.

As Iowa has relatively high demand charges (typically above $20/kW), it is an ideal state for solar plus storage, according the National Renewable Energy Laboratory.