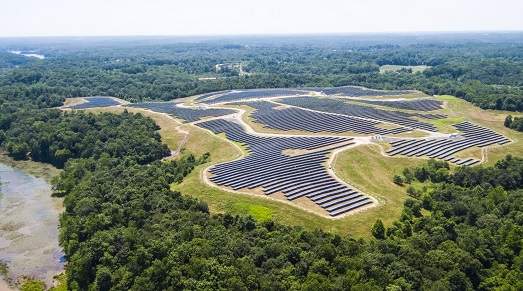 The installation with REC TwinPeak 2S 72-cell solar panels at 345Wp was energized in June 2018. A subsidiary of Building Energy, a multinational IPP in the renewable energy industry is the owner of the project.

According to the EPA, the Annapolis Renewable Energy Park is the largest closed landfill solar project in North America. It covers 80 acres of previously unusable landfill with REC’s award-winning TwinPeak panels with half-cut PERC cells.

“The Annapolis solar installation is a remarkable example of how communities can convert a formerly unusable landfill property into a powerhouse supplier of clean energy that creates also hundreds of new jobs,” comments Cary Hayes, President of REC Americas LLC proudly.

“Likewise, old coal mine areas offer an opportunity to switch to clean solar energy. Considering the fact that the retirement of outdated coal power plants in the U.S. continues rapidly due to decreasing economics, connected coal mines have the chance for a ‘second life’ by being converted to solar parks,” Hayes adds. According to the Sierra Club, since 2010, 274 coal-fired power plants have been retired in the U.S. or are proposed to be retired by a specific date.