In 2017, a combined $1.5 billion was raised by battery storage, smart grid, and energy efficiency companies (an increase from the $1.3 billion raised in 2016), says a new report from Mercom Capital Group LLC on the funding and merger and acquisition (M&A) activity for those sectors. 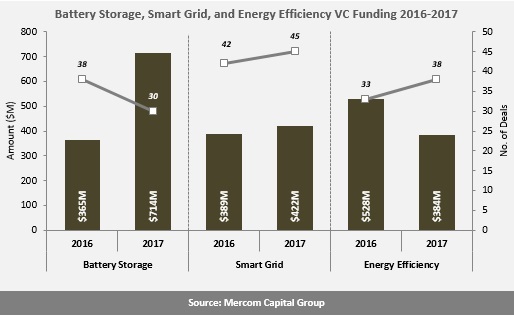 Head here for a copy of the report.

In 2017, VC funding into Battery Storage companies almost doubled to $714 million raised in 30 deals from the $365 million raised in 38 deals in 2016, largely due to the $400 million Microvast deal. Total corporate funding, including debt and public market financing, rose to $890 million compared to $540 million in 2016. 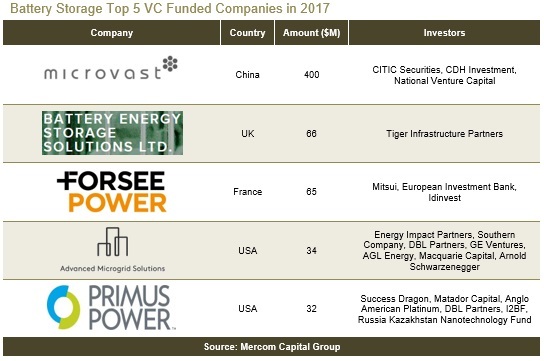 Eighty-six VC investors participated in Battery Storage deals in 2017 compared to 62 in 2016.

In 2017, announced debt and public market financing for Battery Storage companies remained steady at $177 million raised in 12 deals compared to $175 million generated by eight deals in 2016.

Three project funds totaling $446 million were announced in the Battery Storage category in 2017, compared to $820 million raised in 2016 in seven deals.

Podcast: How to sell solar in the Midwest with Inovateus Solar President TJ Kanczuzewski

The top VC funded companies in 2017 were ChargePoint, which brought in $82 million and $43 million in two separate deals, Actility which received $75 million, Brilliant which secured $21 million, and Particle and Urjanet each raising $20 million.

Smart Charging of plug-in hybrid electric vehicle (PHEV) and vehicle-to-grid (V2G) companies had the largest share of VC funding in 2017 with $155 million in 10 deals, followed by Demand Response companies with $94 million in four deals.

In 2017, five debt and public market financing deals totaling $774 million were announced, compared to $224 million raised in five deals in 2016. There were no IPOs announced for Smart Grid companies in 2017.

The top VC funded companies were View, which raised $100 million, followed by Kinestral Technologies with $65 million, RENEW Energy Partners with $40 million, Power Survey and Equipment brought in $24 million, and Stack Lighting with $16 million.

Efficient Home/Building companies captured the most funding with $172 million in five deals in 2017. A total of 51 investors participated in funding deals in 2017 compared to 72 investors in 2016. Energy Impact Partners was the most active investor in 2017.

In 2017, debt and public market financing announced by Energy Efficiency companies fell to $2.9 billion in 16 deals compared to the $3.2 billion raised in 16 deals in 2016. 2017 saw seven Property Accessed Clean Energy (PACE) financing deals bring in more than $1.6 billion compared to 12 deals that brought in $2.3 billion in 2016.

The largest disclosed transaction was the $526 million acquisition of LEDvance by a Chinese consortium consisting of IDG Capital, MLS, and Yiwu.