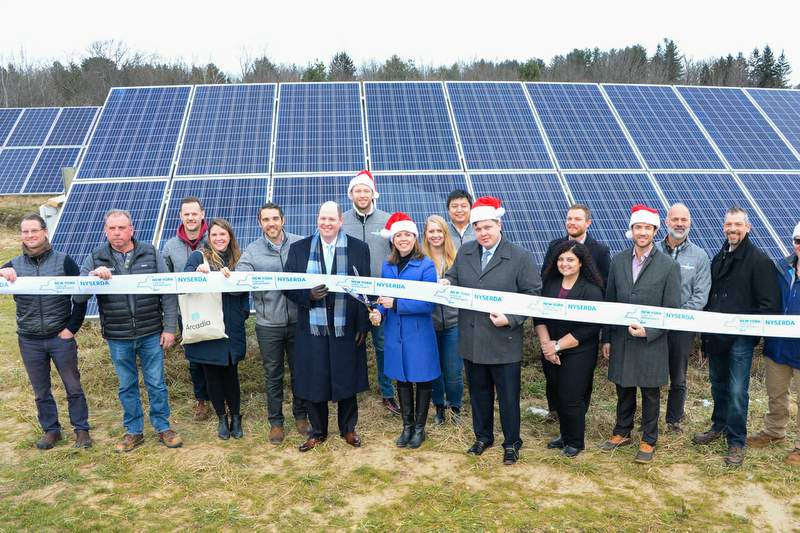 The New York Energy Research and Development Authority (NYSERDA) announced that two gigawatts of solar capacity has been installed across the state, underscoring New York’s position as one of the fastest growing distributed solar markets in the nation with a nearly 1,800 percent growth, leveraging $4 billion in private investment, fueling nearly 12,000 jobs since 2011 and decreasing the cost of solar by nearly 60 percent. This represents one-third of the solar capacity needed to achieve the statewide target to install 6 GW of solar by 2025 and supports Governor Andrew M. Cuomo’s Green New Deal, which calls for 70 percent of the state’s electricity to come from renewable sources by 2030.

The announcement was made by NYSERDA President and Chief Executive Officer Alicia Barton in Saratoga County at a festive ribbon-cutting ceremony for one of the largest completed community solar projects in upstate New York.

Located on Pruyn Hill Road in Mechanicville, the 6.12-megawatt community solar project developed by ForeFront Power, LLC is fully subscribed and will provide clean electricity to more than 1,000 customers. The project known as ForeFront Power’s Mechanicville Community Solar Project will produce more than seven million kilowatt-hours of solar energy annually, the equivalent of taking more than 800 cars off the road. The project received $2.3 million from NYSERDA through NY-Sun.

The Mechanicville Community Solar Project contributes to the over 300 megawatts of community solar or distributed generation projects that have been supported by NY Green Bank with over $100 million in capital commitments since 2017. NY Green Bank, a State-sponsored finance entity is a division of NYSERDA, and has played a market-leading role in financing distributed solar in New York State.

Since 2011, the NY-Sun initiative has achieved the following

In addition to the two gigawatts of solar installed across the state, there is another 1,262 megawatts of solar projects currently under development, including 351 community solar projects that will expand access to more New Yorkers including low-to-moderate-income households. When built, these projects would produce enough energy to power an additional 220,000 average New York homes.