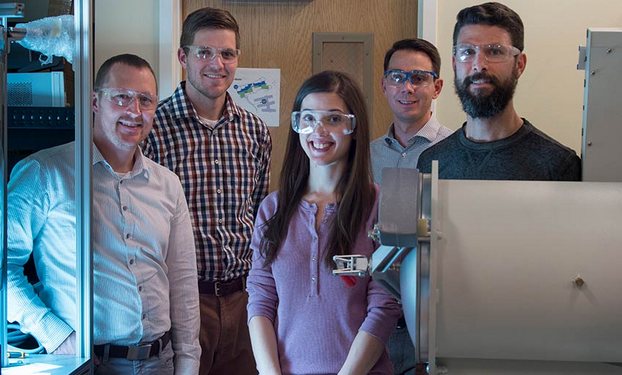 Over the past decade, perovskites have rapidly evolved into a promising technology, now with the ability to convert about 23 percent of sunlight into electricity, but work is still needed to make the devices durable enough for long-term use. Researchers at the U.S. Department of Energy’s National Renewable Energy Laboratory (NREL) created an environmentally stable, high-efficiency perovskite solar cell, bringing the emerging technology a step closer to commercial deployment.

NREL’s unencapsulated solar cell -— a cell used for testing that doesn’t have a protective barrier like glass between the cell’s conductive parts and the elements -— held onto 94 percent of its starting efficiency after 1,000 hours of continuous use under ambient conditions, according to research published in Nature Energy.

“During testing, we intentionally stress the cells somewhat harder than real-world applications in an effort to speed up the aging,” said Joseph Luther, who along with Joseph Berry directed the work titled “Tailored Interfaces of Unencapsulated Perovskite Solar Cells for >1000 Hours of Operational Stability.” “A solar cell in the field only operates when the sun is out, typically. In this case, even after 1,000 straight hours of testing the cell was able to generate power the whole time.”

While more testing is needed to prove the cells could survive for 20 years, or more, in the field (the typical lifetime of solar panels) this study represents an important benchmark for determining that perovskite solar cells are more stable than previously thought.

The typical design of a perovskite solar cell sandwiches the perovskite between a hole transport material, a thin film of an organic molecule called spiro-OMeTAD that’s doped with lithium ions and an electron transport layer made of titanium dioxide, or TiO2. This type of solar cell experiences an almost immediate 20 percent drop in efficiency and then steadily declines as it became more unstable.

“What we are trying to do is eliminate the weakest links in the solar cell,” Luther said. The researchers theorized that replacing the layer of spiro-OMeTAD could stop the initial drop in efficiency in the cell. The lithium ions within the spiro-OMeTAD film move uncontrollably throughout the device and absorb water. The free movement of the ions and the presence of water causes the cells to degrade.

A new molecule, nicknamed EH44 and developed by Alan Sellinger at the Colorado School of Mines, was incorporated as a replacement to spiro-OMeTAD because it repels water and doesn’t contain lithium. “Those two benefits led us to believe this material would be a better replacement,” Luther said.

The use of EH44 as the top layer resolved the later more gradual degradation but did not solve the initial fast decreases that were seen in the cell’s efficiency. The researchers tried another approach, this time swapping the cell’s bottom layer of TiO2 for one with tin oxide (SnO2). With both EH44 and SnO2 in place, as well as stable replacements to the perovskite material and metal electrodes, the solar cell efficiency remained steady. The experiment found that the new SnO2 layer resolved the chemical makeup issues seen in the perovskite layer when deposited onto the original TiO2 film.

“This study reveals how to make the devices far more stable,” Luther said. “It shows us that each of the layers in the cell can play an important role in degradation, not just the active perovskite layer.”

Other co-authors of the paper are Jeffrey Christians, Philip Schulz, Steven Harvey, and Bertrand Tremolet de Villers from NREL; and Jonathan Tinkham, Tracy Schloemer, and Alan Sellinger, who work jointly between NREL and Colorado School of Mines.