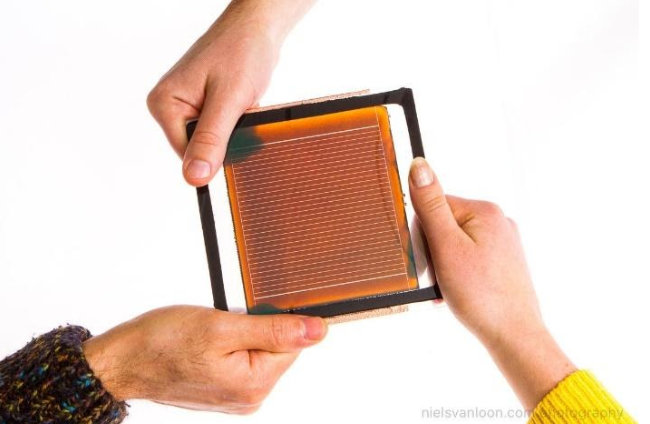 The versatility of perovskite solar modules has generated a lot of interest in this novel solar energy technology. However, concerns have been raised about the stability of perovskite solar modules since the early devices, reported a decade ago, were only stable for minutes. By passing three tortuous aging tests, Solliance and its industrial partners take a major step towards commercialization of this novel solar technology. This will have a major impact on how solar energy can be applied.

The perovskite modules were prepared on 6×6 inch2 glass substrates using industrial processes (sputter coating, slot die coating, atomic layer deposition and laser based interconnection) and glass/glass encapsulated. The aperture area of these modules is 100 cm2. The initial performance of the modules is above 10% (aperture area efficiency).

The applied stress tests include 1,000 hours continuous illumination at an intensity equal to one sun (light soak test); 1000 hours exposure to a high humidity (relative humidity of 85 %) combined with exposure to a temperature of 85 oC (damp-heat test); 50 thermal cycles from -40 oC to 85 oC (thermal cycling test).
During the light soak test the performance increased in the first 100 hours after which the performance stabilized. After the damp-heat test the perovskite module performance retained 95% of its initial performance, thus within the restricted efficiency loss limit to achieve a successful damp-heat test.

The thermal cycling test did not impose any efficiency loss, indicating the excellent stability of the processed modules and the encapsulation strategy to withstand these harsh conditions. These encouraging results puts the perovskite thin film photovoltaic technology one step closer to commercialization, and puts Solliance in a leading position to achieve this target.

What’s so cool about perovskite?