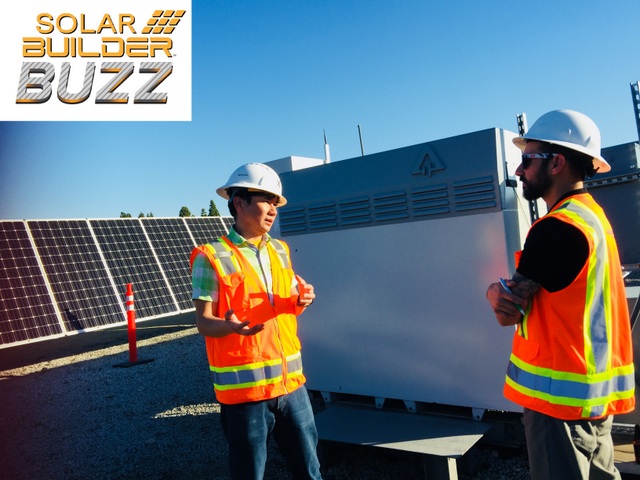 Being the No. 1 tracker worldwide according to GTM Research, I will assume you’ve heard of NEXTracker and its decentralized tracker design by now. What you may not know about is the company’s giant leap into the storage arena with two solutions — NX Drive, a standardized battery enclosure system for generation-plus-storage or stand-alone storage applications, and NX Flow, a modular, integrated solution designed for long duration solar-plus-storage applications.

NX Flow in particular intrigued us – a solution so unique the company worked on and created a new UL standard to test for and prove what it does (more on that below). We stopped by the Fremont, Calif., offices to chat with Chief Technology Officer Alex Au about the concept, maximizing MWh over pure MW, decapitating the duck curve and the effect tariffs might have on all of this.

Be sure to download the full podcast interview below (and subscribe!), but here are three big takeaways.

1. The NEXTracker NX Flow is a 30-kW tracker row with a battery coupled just to that row, making it a modular power plant that achieves a renewable base load. There are two keys to its value proposition. One is the battery.

Au: “Two years ago we started an RFP called ‘Decapitate the Duck’ specifically to address the storage market. We reviewed north of 40 technologies. We had an aggressive demand profile, tested units and agreed to move forward with the Avalon battery — a vanadium flow battery. As of Christmas last year, we were able to pass the point of 10 years worth of cycles. Approximately 1.25 cycles per day, 100 percent depth of discharge. We haven’t been able to detect any degradation. With other batteries there are maintenance cycles and equalization time, but we haven’t had to do any of that either.”

“The Avalon product mates perfectly with one of our 30-kW rows; it is a 6,000 lb unit, can ship completely wet and has actually gone through a burn-in cycle in the factory. That testing and burn-in period means you literally just plug in the DC wires for the modules and then the AC grid. Takes less than an hour and 15 mins to do the full installation with piers and everything.”

2. The second key is the work done with PG&E and UL to create a testing standard that proves the system is only using the grid to power a few electrical components and not charging the battery or sending electrons back into the grid.

Au: “The NEM program, the (self-generation incentive program) SGIP and ITC, have a common theme: If you’re going to participate, you cannot take the energy from the grid and sell it back. You have to have 75 to 100 percent of the power generated from a renewable energy source. To do that, you need meters to show how much of the PV is being produced, and how much is being put on the grid.

“That’s not an integrated solution. You literally have to split everything out and have to put a meter there for added cost. And then to govern that, there is additional labor and time required. We wanted to do everything natively. We took our Self-Powered Controller and put it inside the battery, so we’re talking to the battery and to the inverter, which is on our native SCADA platform.

3. In the end, NX Drive isn’t necessarily generating more power, but smoothing out production much better over time. But, because of the modularity and the system’s tracking algorithms and data analytic capabilities, more production is possible too.

Au: “You no longer have clipping loss. A lot of guys design DC to AC ratios north of one. In our case, any time you go north of one, it gets stored and could be used in the later part of the day. That’s why we called our RFP ‘Decapitate the Duck’ because the energy is stored and shifted to later times when the head of the duck [curve] would pop up.

“We can go out and apply for an SGIP type program and can put more than 1 MW of PV panels out there because a flow battery actually falls into the fuel cell category. All we care about is nameplate rating. So we have a UL listed inverter with guts that are 30 kW but de-rated to 15 kW. So, instead of 40 tracker rows, we have 60 tracker rows and take a lot more of the energy produced in the day, store it, and then release it later in the day when the sun sets.”

Be sure to listen to the full interview for more on the concept of TrueCapture, what NEXTracker is doing with its advanced analytics and more on the complicated but game-changing proposition of including storage at the point of generation.