These are the top findings of the Advanced Energy Now 2017 Market Report, prepared by Navigant Research for AEE. The report includes global and U.S. revenue for the industry annually from 2011 to 2016, with data broken down by seven segments covering both supply and demand and 42 subsegments, representing over 100 specific product and service categories. 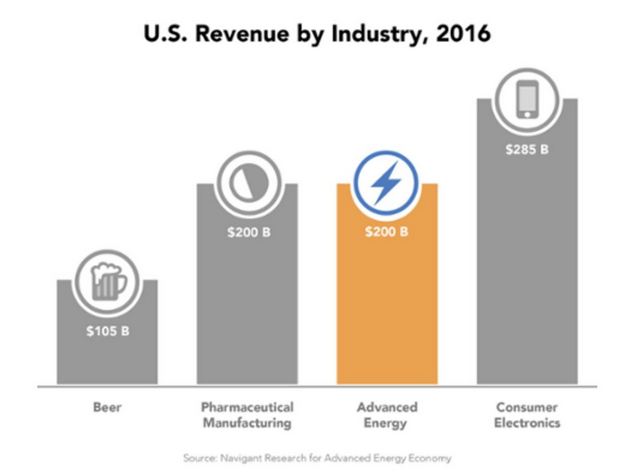 In 2016, strong growth in U.S. power generation and energy management technologies offset a sharp decline in fuels, especially ethanol, for growth of 1 percent overall, to $199.2 billion. As in 2015, growth in the U.S. advanced energy market was impacted by persistent low oil prices. Ethanol pricing is highly correlated with oil prices, as well as prices for corn feedstock, which were also low in 2016. While production remained steady, ethanol revenue dropped 24 percent, from $27.3 billion to $20.6 billion. Without counting ethanol, the U.S. advanced energy market grew 5 percent in 2016, three times the growth of U.S. GDP (1.6 percent).

Globally, 14 percent growth in products and services that make buildings more energy efficient led to overall revenue growth of 7 percent, double the 3.1 percent growth of the global economy, to a total of $1.4 trillion.

“Over the past six years, the U.S. advanced energy market has grown a stunning 28 percent, with significant economic impact, now supporting more than 3 million jobs across the nation,” said Graham Richard, Chief Executive Officer, Advanced Energy Economy. “AEE and our business members are committed to accelerating this business opportunity by working with state and federal policymakers, and with major corporate customers who are demanding advanced energy options for their operations.”