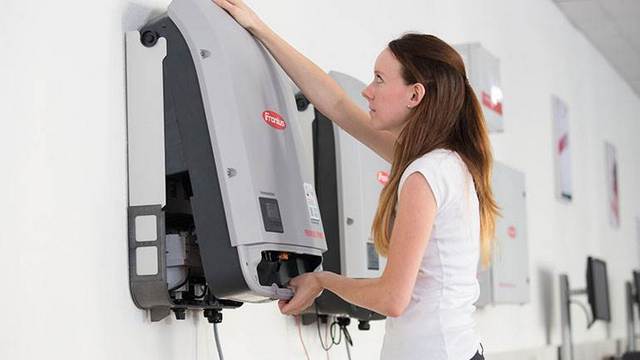 While inverter oversizing is not new to the solar industry, there are still inverter manufacturers that do not offer an attractive DC:AC ratio for their inverters. This highly impacts cost and profitability of a solar system. Therefore, it’s important for system designers and solar installers to have a closer look on the oversizing capabilities of inverters, and to tap into their hidden power.

Inverter oversizing refers to adding more DC power to an inverter than it is rated for. For example, if you connect 6 kWp of DC power to a 5 kW inverter, you oversize the system by 20%. This makes total sense, because the peak power of 6 kWp will only come up in very few and short moments – so using a 6 kWp inverter (no oversizing) would be unnecessary and therefore a waste of money. In situations where the system actually generates more than 5 kW, the inverter would clip are so rare and so short, that it is negligible. The advantages you gain by oversizing clearly outweigh the effects of clipping.

Modern, high-quality inverters like Fronius SnapINverters can handle DC power of up to 150% of the inverter’s nominal output power, which would be for example 7.5 kWp on a 5 kW inverter, which is a lot of hidden power. Let’s have a closer look on the advantages of oversizing.

A main advantage of oversizing are the initial cost savings. For the price of a 5 kW inverter, you get to support a 7.5 kWp system – benefitting from 2.5 kW of hidden power in your 5 kW inverter (for free). Inverters with a poor DC/AC ratio, or no oversizing capability whatsoever, do not provide this cost saving, increasing the cost per Watt significantly.

In commercial, rooftop or ground mount systems, oversizing reduces the number of inverters needed to support the available array size and its kWp on a given roof. This not only reduces the initial cost, but also the O&M expenses – both resulting in a better return on the investment.

Residential AC panels only allow a certain amount of solar power (AC) being connected to them. For example, 3.8 kW AC is the highest power that is possible on a 100 A service panel, 7.6 kW on a 200 A service panel and 11.4 kW on a 300 A panel. As the cost of upgrading a service panel can be very high, it is useful to fit the largest system possible on the existing AC panel. Inverter oversizing helps to maximize the DC power of your solar system. If you have a 200 A panel and a 7.6 kW AC inverter with 50% oversizing, you can actually get 11.4 kWp of DC power. If you were to choose an inverter without oversizing capability, you would be stuck with only 7.6 kWp, or you would have to invest in an expensive panel upgrade.

While the efficiency of high-quality inverters is quite stable over the whole power range, it’s still getting higher the closer the inverter operates to its nominal power. By oversizing a system, the operating point of the inverter is at a higher power, closer to its AC rating, and reaches its capacity earlier in the morning and stays there until later in the afternoon. This not only improves the inverter’s efficiency, but also maximizes the overall energy yield, while keeping inverter cost low – for maximum return on investment.

Conclusion: Look twice when choosing inverters. Make sure to take their oversizing capabilities into account and to tap into the hidden power of high-quality inverters. Fronius SnapINnverters, for both residential and commercial, are capable of 50% oversizing (DC:AC ratio of 1.5:1) – which is a lot of hidden power, so system designers can really maximize the above advantages of oversizing.