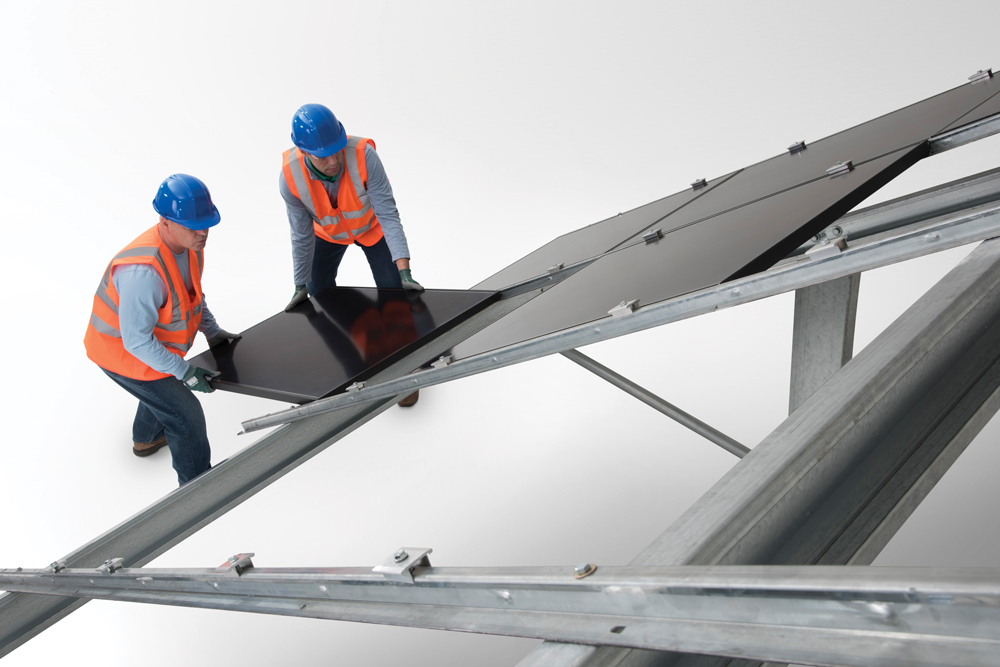 In this uncertain #TrumpTariffs market, many investors have less appetite for newer, less proven systems, seeing that as another avenue of risk in projects where pennies and seconds count more than ever. This puts the spotlight on companies and products that can deliver the most certainty in terms of upfront costs, bankability and logistics. Given that context, the 2018-’20 market may not be interested in a new ground-mount PV concept, but the new Field-Fast system from OMCO is an exception that checks all of those boxes and more.

OMCO is one of those companies that’s been around for decades, supplying more product in the background than you realize. A roll-former that has cultivated relationships with U.S. steel providers since the 1950s, OMCO has provided nearly 8 GW of solar currently in the ground across the globe, working with industry giants like First Solar and Sunpower as a contract manufacturer. So, the history and bankability is there.

It wasn’t until last year that OMCO decided to jump from more of a supporting actor to leading man with the Field-Fast fixed-tilt system. The design is influenced by its years of experience and incorporates value-added touches that leverage its OEM factory-direct capability, such as pre-assembly and less loose hardware. In large-scale solar projects, small improvements can add up to sizable savings.

Now a year after its launch and after a few revisions (a pre-assembled tilt bracket, for instance), OMCO has launched the Field-Fast system into the market. Let’s take an in-depth look at how it works and why it might benefit your next project.

The key advantage in ordering direct from the factory is reducing the filler material by preassembling as much as possible. The provided Field-Fast parts are boiled down to only five bill of material items vs. multiple pages of line items. Hardware arrives to the site pre-sorted and counted specific to each block for quick staging and identification.

“On the EPC side, probably the biggest headache, as a customer is the number of moving parts,” says Eric Goodwin, director of business development from OMCO Solar, who spent part of his career leading the EPC supply chain team for First Solar. “Construction teams always lose hardware or lose track of something, and the next thing you know 60 people are waiting around for a bolt to arrive. We’ve tried to address those types of issues.”

The assembly bracket ships as a slim component that unfolds and notches into the tilt bracket. This is secured by an OMCO-designed, preassembled clip that is hammered into place in four locations. Done. That all happens at ground-level with two workers.

After placing a rubber pad over pre-installed threaded fasteners, the modules are slipped into preassembled clips and laid on top. The clips already have a bolt retained inside, and the table module rails already contain the threads for the clip, which means only one worker is needed to secure the panel, working from standing-level and never above the glass. Two clips are needed for completing the assembly of two modules. 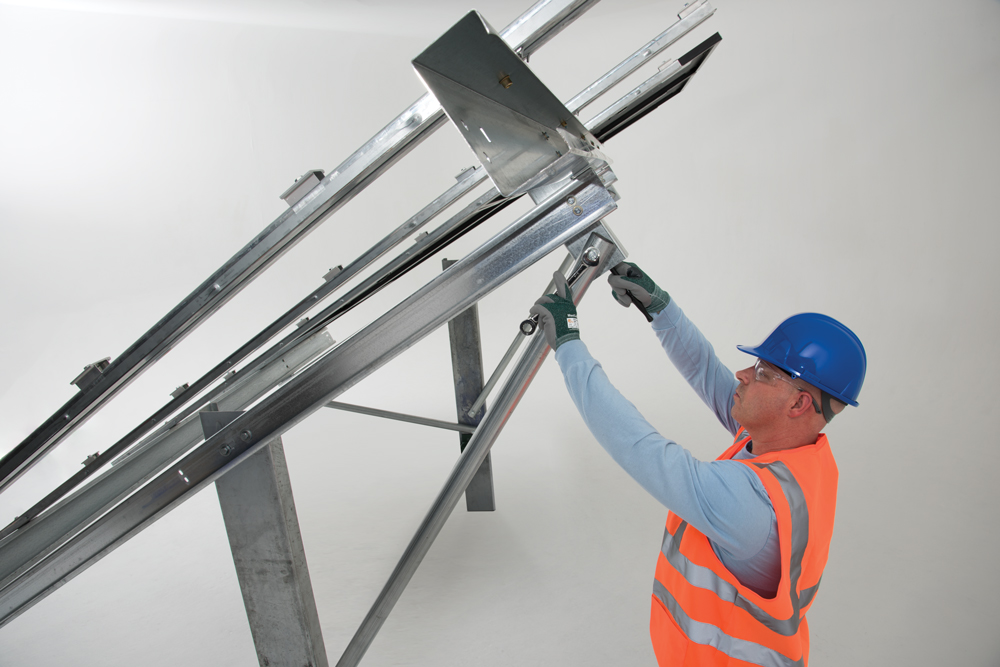 The company recently conducted assembly time trials of the new Field-Fast racking, and, with just two installers, here were the results for structural assembly (each set consisting of 10 panels and 300 Watts between two posts):

Next comes the module installation for the same two installers on the same labor rate and efficiency:

Stacked against installation of conventional systems, the Field-Fast racking can reduce costs per watt from 35 to 50 percent.

“With fewer parts and installation steps, we basically can cut the install time in half in some cases,” Goodwin says. “On the mechanical BoS part of an install, which is the racking itself, we’re able to show about 40 percent labor efficiency on a cost per watt, so our actual labor cost per watt for mechanical is about .4 cents per watt, and that’s about 20 percent less than we’re seeing in the market for racking. On the panel installation, those have taken labor costs down to .2 cents per watt.”

OMCO can also handle the purlins and turnkey construction services, but this isn’t just another tale of faster turn times and reduced costs. Ordering factory-direct snips out other possibilities for delays, such as last second module changes.

“We can adjust our roll-form program for any size framed module [including the new First Solar Series 6] for Field-Fast,” Goodwin says. “We know of projects where modules change last second because of prices, and we’re able to make those changes and adjust to that. That can be difficult if you’re having it fabricated elsewhere.” 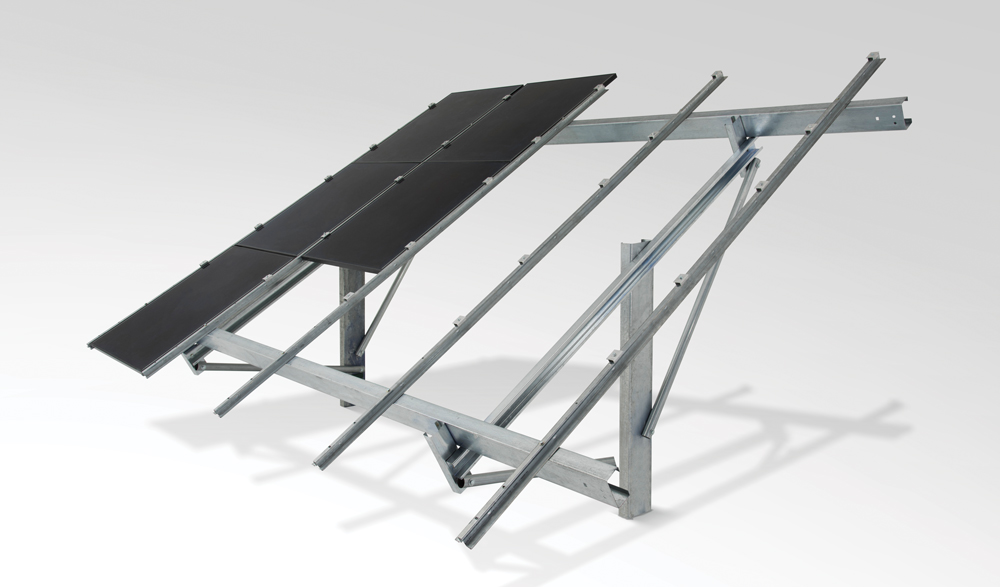 As mentioned, OMCO is part of the First Solar ecosystem and has a slick module interface bracket (MIB) for First Solar tracker projects as well as an OEM fixed-tilt solution for Series 4 modules with nearly 5 GW of the baseline design installed. The MIB arrives to the jobsite fully assembled — the structural components, module clips, threaded hardware, rubber inserts. It slips on over the torque tube with a single carriage bolt fixing it in place.

“The unexpected increase and extension of Series 4 module life was a nice surprise. We have designed a product for almost 6 GW of First Solar projects, and the Field-Fast series is even more tailored to Series 6 when it comes out.”

Being a First Solar ecosystem partner is just another notch in its bankable, tariff-free value proposition. As First Solar scales and increases production into 2019 and 2020, OMCO is looking to capitalize, no matter what the new steel tariff brings.

This feature was in the May/June 2018 issue of Solar Builder magazine. Sign up for your free print or digital subscription here.