When solar enthusiast Jeff Schocka Conger started his own company in La Crosse, Wis., a sluggish market forced him to close up shop less than a year later. But when one door closes, another opens.  “The political climate means there’s not much incentive for solar in Wisconsin,” he explained. “The renewable energy market is growing twice as fast in Minnesota, so I figured it was time for a change.”

In early April 2016, Jeff began working as a project manager at Aquilla Solar in Wabasha, Minn., just over an hour north of La Crosse. “Aquilla is the only PV installer in eastern Minnesota, so solar is in high demand,” he explained. “The region also has lots of trees blocking the sun, so it takes more PV panels to generate the same amount of power resulting in larger installations.”

Aquilla Solar Corporation provides full-service installation of PV solar systems for customers in southeastern Minnesota. While a majority of Aquilla’s projects are for residential customers, they also install PV systems for commercial and agricultural clients and for non-profit organizations. 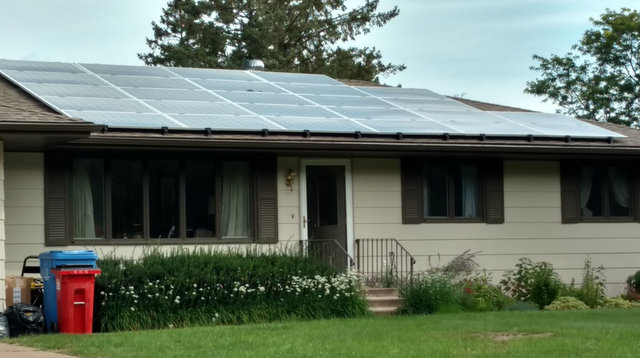 In mid-May 2016, Jeff met Mike Dunlap, Midwest Sales Manager for Roof Tech, at the Midwest Solar Expo in St. Paul, Minn. After learning about Roof Tech E Mount AIR, Jeff decided to try it for the first time to install an 8.9-kW PV system at his mother-in-law’s home in La Crosse. Jeff noted that Mike was instrumental in guiding him and his crew through that first project. After that first job, Jeff and Mike worked with Aquilla’s local supplier to come up with a pricing plan for future projects.

Jeff emphasized that RT Butyl was a key factor in choosing E Mount AIR for Aquilla’s projects. “Here in Minnesota, temperatures easily top 100 degrees in summer and can plunge to minus 35 in winter,” he said. “So it’s critical that any mounting system can withstand those extreme fluctuations.”

Jeff also noted that winter snowfall typically adds a load of 20 to 30 lbs. per square foot to rooftops, so it’s important to use lightweight components that have a lower point load like E Mount AIR whenever possible. “With railed mounting systems, you have to penetrate the roof which can cause the shingles to deteriorate much faster over time,” he said. “With E Mount AIR, the RT Butyl creates a watertight seal that will last for the life of the roof.”

Today, E Mount AIR continues to be the mounting solution of choice for Aquilla. “By late August we had installed five projects using E Mount AIR, and we’ll have eight more installed by the end of September,” said Jeff. “We also have more than 100 kW of new installations coming up by the end of 2016, including some municipal projects. We plan to use E Mount AIR on most of them. It’s so much easier and faster to install than railed systems, and our customers love the way it looks. Do three jobs with Roof Tech, and you’ll change your mind on the first job. The transition from rails to E Mount AIR is really smooth. You just have to give it one try to appreciate the difference.”