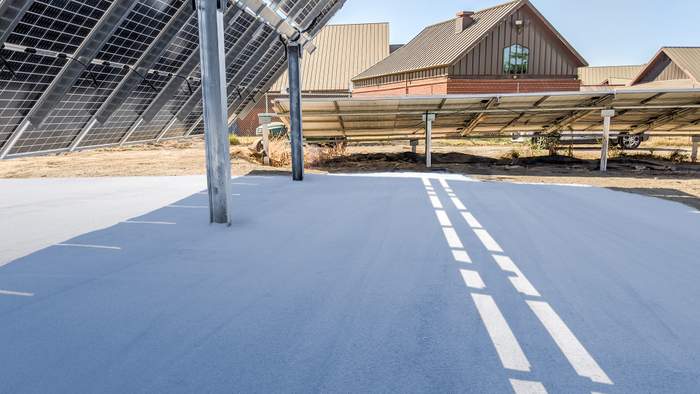 Terra Pave, a reflective, albedo-boosting soil binder aimed at bifacial solar sites, recently passed testing from Sandia National Laboratories in regards to heavy metal contaminants, organic contaminants and water pollution and its comparison to the results with those for AEP (Asphalt Emulsion Product).

What is it, exactly? Terra Pave products are liquid soil stabilizers that permanently bind and transform the ground into a pavement-like layer. Terra Pave Top-Seal is engineered to achieve the albedo of snow – for use with bifacial solar panels. It was named a finalist in the AMERICAN-MADE SOLAR PRIZE competition from NREL this year. Terra Pave is exclusively available via Beckett Solar Energy.

According to the results: Terra Pave products have clear advantages against AEP. Today approximately 3 million tons of emulsions are produced in the United States representing about 5% to 10% of asphalt consumption. Approximately 8 million tons of asphalt are used in emulsion form worldwide, about 9% of all asphalt usage. The inductively coupled plasma mass spectrometry from SANDIA National Laboratories have revealed that in most cases, Terra Pave products exhibited far less to no heavy metal contaminants compared to AEP. Road bases, which when subjected to rainwater, are known to leach heavy metals and contaminate water tables.

Large quantities of heavy metals polluted into the environment threaten and compromise animal and human health. Due to the nondegradable state of metals, there can be bioaccumulation of these pollutants in the food chains, with remediation typically requiring extensive physical and chemical sequestrations in soil, air, and/or water. Some Terra Pave products exhibited high levels of titanium, magnesium, potassium and calcium. This is not concerning since these metals are considered safe.

In addition to metal pollution, organic contaminants are of concern with asphalt products. Freshly paved roads and tar roofs are a significant source of air and water pollution. VOC and intermediate/semi-volatile organic compounds emissions are responsible for substantial public health effects.

On salt: Aside from organic pollution, water pollution can also occur from the leaching of salt into the environment. Increased salinity can have lethal and sublethal effects on aquatic plants and invertebrates, including making freshwater non-potable for human consumption. Ion chromatography reveals that Terra Pave contains higher levels of salt than AEP.