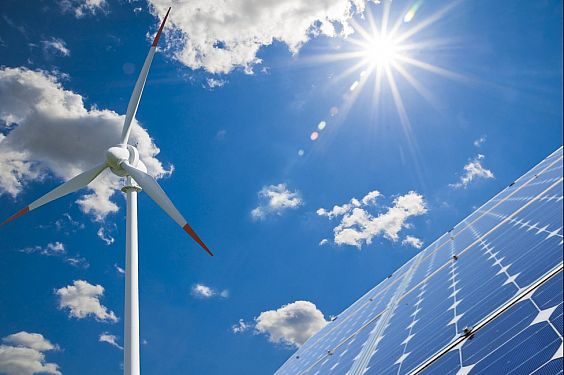 The United States could reliably meet about 80 percent of its electricity demand with solar and wind power generation, according to scientists at the University of California, Irvine; the California Institute of Technology; and the Carnegie Institution for Science.

However, meeting 100 percent of electricity demand with only solar and wind energy would require storing several weeks’ worth of electricity to compensate for the natural variability of these two resources, the researchers said.

“The sun sets, and the wind doesn’t always blow,” noted Steven Davis, UCI associate professor of Earth system science and co-author of a renewable energy study published today in the journal Energy & Environmental Science. “If we want a reliable power system based on these resources, how do we deal with their daily and seasonal changes?”

The team analyzed 36 years of hourly U.S. weather data (1980 to 2015) to understand the fundamental geophysical barriers to supplying electricity with only solar and wind energy.

“We looked at the variability of solar and wind energy over both time and space and compared that to U.S. electricity demand,” Davis said. “What we found is that we could reliably get around 80 percent of our electricity from these sources by building either a continental-scale transmission network or facilities that could store 12 hours’ worth of the nation’s electricity demand.”

The researchers said that such expansion of transmission or storage capabilities would mean very substantial – but not inconceivable – investments. They estimated that the cost of the new transmission lines required, for example, could be hundreds of billions of dollars. In comparison, storing that much electricity with today’s cheapest batteries would likely cost more than a trillion dollars, although prices are falling.

Other forms of energy stockpiling, such as pumping water uphill to later flow back down through hydropower generators, are attractive but limited in scope. The U.S. has a lot of water in the East but not much elevation, with the opposite arrangement in the West.

Fossil fuel-based electricity production is responsible for about 38 percent of U.S. carbon dioxide emissions – CO2 pollution being the major cause of global climate change. Davis said he is heartened by the progress that has been made and the prospects for the future.

“The fact that we could get 80 percent of our power from wind and solar alone is really encouraging,” he said. “Five years ago, many people doubted that these resources could account for more than 20 or 30 percent.”

But beyond the 80 percent mark, the amount of energy storage required to overcome seasonal and weather variabilities increases rapidly. “Our work indicates that low-carbon-emission power sources will be needed to complement what we can harvest from the wind and sun until storage and transmission capabilities are up to the job,” said co-author Ken Caldeira of the Carnegie Institution for Science. “Options could include nuclear and hydroelectric power generation, as well as managing demand.”

Support for this study was provided by the National Science Foundation.