The question on the collective renewable energy industry’s mind since last November has been, “How will the election of Donald Trump impact us?” Mercom’s Q1 Solar 2017 Funding and M&A Report gives the first bit of insight into investor confidence in the solar industry since President Trump took office.

Total corporate funding in the solar sector increased from Q4 2016’s total to $3.2 billion and year-over-year, Q1 2017 was about 15 percent higher than Q1 2016. None of the five largest announced projects (by funded dollar amount) were in the United States, but the largest project acquisition during the quarter was. 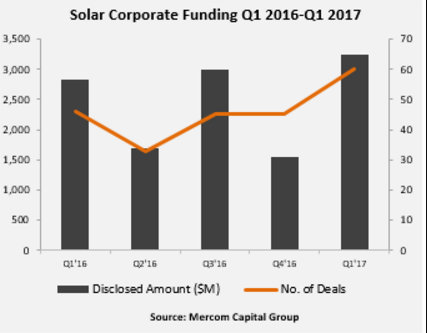 “Q1 funding levels were up in the solar sector from the 2016 lows, largely due to increased debt financing activity. Corporate funding never reached $3 billion in any of the quarters in 2016. M&A activity was also strong with several large deals. Solar public companies also had a good first quarter,” commented Raj Prabhu, CEO of Mercom Capital Group. 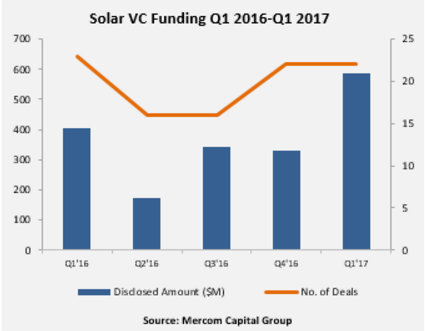 A large part of the VC funding in Q1 2017 went to solar downstream companies; $548 million was raised in nine deals.

Top VC deals included the $200 million raised by ReNew Power Ventures followed by the $155 million raised by Greenko Energy Holdings, the $125 million secured by Hero Future Energies, and then Silicon Ranch’s $55 million. A total of 23 VC investors participated in Q1 2017. 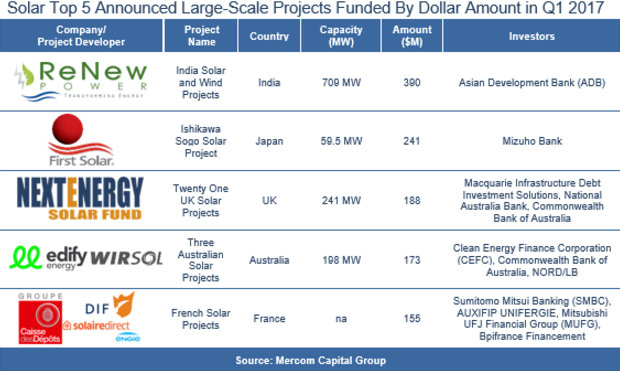 In Q1 2017, Solar Mosaic raised $139 million through the first securitization of its residential solar loan portfolio at a 4.45 percent interest rate.

Residential and commercial solar funds announced in Q1 2017 dropped to $630 million in six deals compared to $1.5 billion in eight deals in Q4 2016. During the same quarter last year (Q1 2016), $1 billion was raised in six deals. Of the $630 million announced this quarter, $500 million went towards the lease/PPA model and $130 million went to loan funds. A total of more than $23 billion has now gone into residential and commercial funds since 2009.