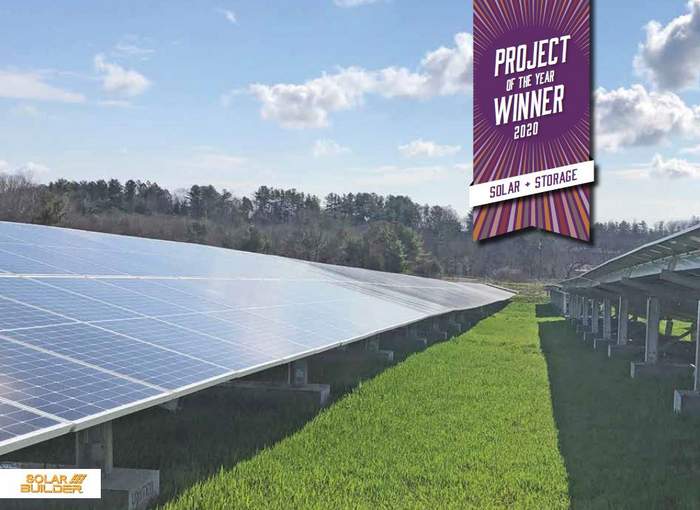 The 2020 Solar + Storage Project of the Year, as voted on by the readers of Solar Builder, is the Amesbury Landfill Project in Amesbury, Mass., owned and developed by Kearsarge Energy of Boston, in partnership with the City of Amesbury and constructed by CS Energy.

Yes, battery storage on a landfill. At the time of its completion, it was the largest solar + energy storage system in Massachusetts (part of the state’s SMART program), with 4.5 MW of solar power coupled with a 3.8 MWh lithium-ion storage solution to provide power when needed and stabilize grid power loads.

This project leveraged underutilized municipal land and turned the landfill into a renewable energy producer. The City of Amesbury will see a boost in local construction/maintenance employment, and generation of tax and lease revenue and energy credits that will reduce municipal spending on electricity. New tax and lease revenues plus energy savings will total $3.6M over 20 years.

Building a solar array with battery storage on a landfill presented some unique challenges. First among them was the weight of the battery system and its concrete foundation, which had to be properly distributed to meet the landfill’s 7-psi maximum surface pressure requirement.

“The first thing we needed to understand was exactly how heavy the structure was going to be,” says Kevin Magayah, VP of business development with CS Energy, the project’s EPC contractor, in the video interview above. “It’s a basic question, but what is the layout of this container? Is the weight mostly on one side? Is it evenly split?”

CS Energy worked with the battery manufacturer’s teams to engineer an effective and safe final layout, including the battery device, its container, access structures, conduit assemblies and the concrete substructure. Siting the container was equally complex in order to minimize the inevitable loss of solar production that also worked as a good location for an additional large structure.

“When you have to find real estate for the container, you actually lose a little solar capacity. Being able to sell the power from the storage outweighed those losses, thanks to a rigorous design effort,” Magayah says.
Other engineering and construction challenges were related to the nature of the landfill itself. Unlike stable ground-mounted arrays, landfill systems are prone to settlement, making adoption of a flexible, high performance design critical.

“To this day I haven’t found a beautiful flat landfill yet,” Magayah laughs. “We chose the RBI system because of the way the purlins are connected from ballast to ballast. You need a racking system to follow that changing grade, and the RBI system does a good job of that. On the inverter side, Sungrow string inverters were the right technology choice as it allowed us to split up the different sections of the landfill. As your landfill surface changes orientation, the irradiance is different. Using string inverters means the production impact was limited to each inverter in a section.”

“Finding creative solutions to tough engineering problems made CS Energy a terrific partner on the Amesbury project,” said Andrew Bernstein, managing partner of Kearsarge Energy. “Going the extra mile on the engineering side optimized production capacity and allowed the City of Amesbury to garner electricity savings that otherwise wouldn’t have been possible.”