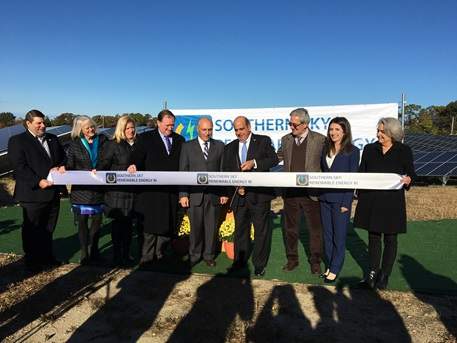 Southern Sky Renewable Energy RI cut the ribbon on a 6.3-MW solar array on the airport connector in Warwick, R.I., this week. The 37-acre brownfield site will host almost 16,000 panels producing enough clean energy to power the City of Warwick’s municipal buildings and other city locations.

The site was previously home to Leviton Manufacturing Company, an international manufacturer of electrical components. Following their departure, the site was vacant for over 20 years, despite its convenient location near T.F. Green Airport. Southern Sky worked closely with RI DEM to create a “remedial action work plan” for the safe construction and development of the brownfield.

“We were excited to turn this brownfield into a useful, energy-saving, revenue producing property for the City of Warwick,” said Ralph A. Palumbo, President of Southern Sky Renewable Energy RI. “Brownfield sites are challenging, but our collaboration with RI DEM and OER helped this project stay on budget and schedule. Our site on the airport connector is a powerful statement to visitors – the City and State are committed to renewable energy.”

The City will receive property taxes over the 25-year life of the project. In addition, the project also received a $350,000 grant through CommerceRI’s Renewable Energy Fund.

Southern Sky contracted with Conti Solar to design and construct the facility and the project received a capital investment from Captona Partners, a New York based investment company specializing in power generation and energy infrastructure assets.