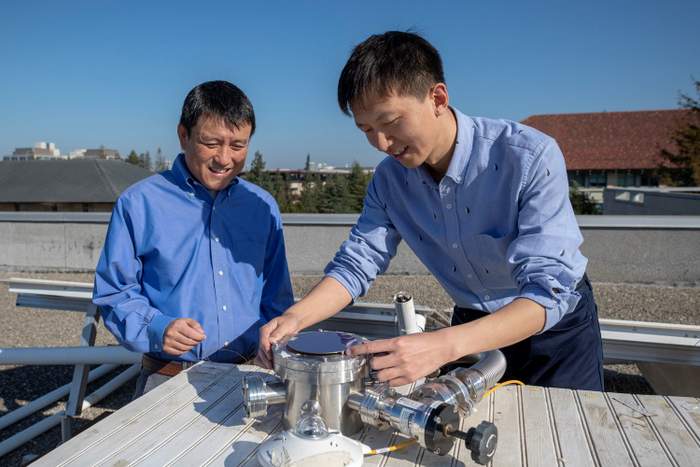 Professor Shanhui Fan and postdoctoral scholar Wei Li atop the Packard Electrical Engineering building with the apparatus that is proving the efficacy of a double-layered solar panel. The top layer uses the standard semiconductor materials that go into energy-harvesting solar cells; the novel materials on the bottom layer perform the cooling task. (Image credit: L.A. Cicero)

“We’ve built the first device that one day could make energy and save energy, in the same place and at the same time, by controlling two very different properties of light,” said Fan, senior author of an article appearing Nov. 8 in Joule.

Today, such arrays do one thing – they turn sunlight into electricity. But Fan’s lab has built a device that could have a dual purpose – generating electricity and cooling buildings.

The sun-facing layer of the device is nothing new. It’s made of the same semiconductor materials that have long adorned rooftops to convert visible light into electricity. The novelty lies in the device’s bottom layer, which is based on materials that can beam heat away from the roof and into space through a process known as radiative cooling.

In radiative cooling, objects – including our own bodies – shed heat by radiating infrared light. That’s the invisible light night-vision goggles detect. Normally this form of cooling doesn’t work well for something like a building because Earth’s atmosphere acts like a thick blanket and traps the majority of the heat near the building rather allowing it to escape, ultimately into the vast coldness of space.

Holes in the blanket

Fan’s cooling technology takes advantage of the fact that this thick atmospheric blanket essentially has holes in it that allow a particular wavelength of infrared light to pass directly into space. In previous work, Fan had developed materials that can convert heat radiating off a building into the particular infrared wavelength that can pass directly through the atmosphere. These materials release heat into space and could save energy that would have been needed to air-condition a building’s interior. That same material is what Fan placed under the standard solar layer in his new device.

Zhen Chen, who led the experiments as a postdoctoral scholar in Fan’s lab, said the researchers built a prototype about the diameter of a pie plate and mounted their device on the rooftop of a Stanford building. Then they compared the temperature of the ambient air on the rooftop with the temperatures of the top and bottom layers of the device. The top layer device was hotter than the rooftop air, which made sense because it was absorbing sunlight. But, as the researchers hoped, the bottom layer of the device was significant cooler than the air on the rooftop.

“This shows that heat radiated up from the bottom, through the top layer and into space,” said Chen, who is now a professor at the Southeast University of China.

What they weren’t able to test is whether the device also produced electricity. The upper layer in this experiment lacked the metal foil, normally found in solar cells, that would have blocked the infrared light from escaping. The team is now designing solar cells that work without metal liners to couple with the radiative cooling layer.

“We think we can build a practical device that does both things,” Fan said.

Shanhui Fan is the director of the Edward L. Ginzton Laboratory, a professor of electrical engineering, a senior fellow at the Precourt Institute for Energy and a professor, by courtesy, of applied physics. Postdoctoral scholars Wei Li of Stanford and Linxiao Zhu of the University of Michigan, Ann Arbor, also co-authored the paper.