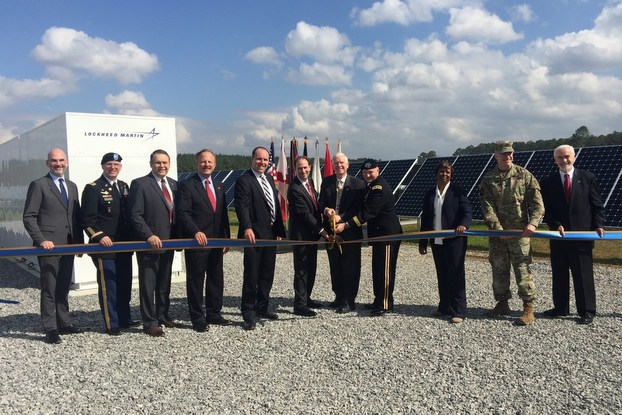 Redstone Arsenal and SunPower Corp. cut the ribbon for a 10-MW solar photovoltaic and 1-MW energy storage system now in operation at the U.S. Army post in Alabama. The solar array and storage project was designed, built and will be operated and maintained by SunPower, with financing provided by Birmingham-headquartered Regions Bank. The solar array, combined with a storage component that maximizes clean electricity use at Redstone, is expected to improve the Army’s energy resilience, reduce electricity costs, and provide energy diversity.

“Through innovative collaboration between the Army, Team Redstone, and industry partners, we’ve cost-effectively built a reliable, home-grown renewable energy project that is expected to deliver savings for decades, allowing us to invest more resources in protecting the nation and those we serve,” said Lt. Gen. Edward M. Daly, Senior Commander, Redstone Arsenal.

This project is a collaboration between the U.S. Army Office of Energy Initiatives, Redstone Arsenal, the U.S. Army Corps of Engineers, and SunPower, and features a SunPower Oasis Power Plant system. The fully integrated, modular solar power block is engineered and built for compatibility with a future micro-grid, and is paired with storage to reduce peak power-related demand charges for Redstone Arsenal.

“Demand for solar-and-storage technology continues to rise, delivering significant savings to customers with high electricity demand, like the U.S. military,” said Nam Nguyen, SunPower executive vice president. “We congratulate the Army and Redstone Arsenal for seeing the value in a resilient energy project from SunPower that will help lower operational costs and free up more funds to support their mission.”

The Army is purchasing 100 percent of the electricity generated by the project through a 27-year power purchase agreement (PPA) at rates competitive with traditional energy sources. Regions Bank is providing the capital required for the solar and storage project, eliminating the need for capital expenditure by the Army. Cornerstone Financial Advisors, LLC served as financial advisor to Region Bank on this transaction.

“Regions Bank supports the development of innovative clean energy generation by providing efficient financing solutions that take into consideration advances in technology, such as this project’s energy storage system,” said Frank Conley, Senior Vice President Solar Finance for Regions. “We are very pleased to team up with SunPower on the Redstone Arsenal solar facility and have a role in reducing the Army’s electricity costs while enhancing its clean energy utilization.”