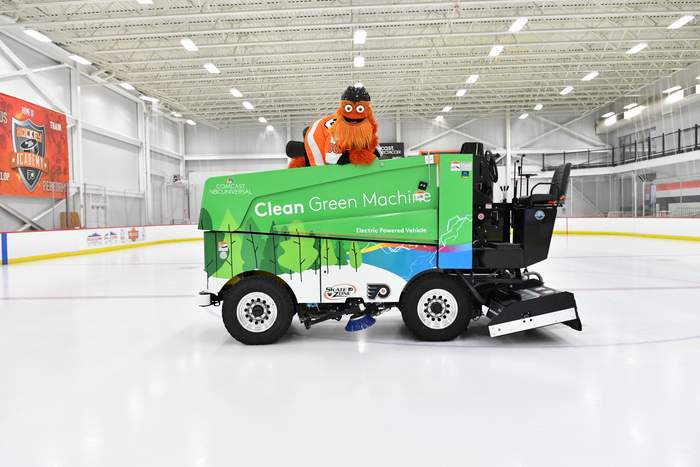 Through an agreement with SunPower, Comcast Spectacor, owner of the Wells Fargo Center arena and the National Hockey League’s Philadelphia Flyers, completed the installation of a 1.06-MW solar system at the Virtua Center Flyers Skate Zone at Voorhees in New Jersey. Comcast Spectacor has also introduced an electric Zamboni ice resurfacer and will achieve 100 percent renewable electricity supply for the facility starting in 2021.

Project details: The Virtua Center Flyers Skate Zone at Voorhees is the training facility for the Philadelphia Flyers and the National Lacrosse League’s Philadelphia Wings and offers public ice-skating sessions and youth hockey activations year-round. Installation of the rooftop solar panels began in May 2020 and was completed in November 2020. Comcast Spectacor will sell the Renewable Energy Certificates (RECs) from the onsite solar and purchase national RECs to provide all Spectacor facilities with 100% renewable electricity. The Virtua Center Flyers Skate Zone at Voorhees has also replaced its traditional propane Zamboni machine with an electric model.

“Combined with the activation of wind energy for Wells Fargo Center and our REC purchases, the Flyers will now train and compete in facilities completely powered by renewable electricity, which furthers Comcast NBCUniversal’s ongoing commitment to sustainable innovation,” said Dave Scott, Chairman and CEO, Comcast Spectacor.

The onsite solar project is the latest in an ongoing series of sustainability efforts across Comcast Spectacor facilities. In combination with the electric Zamboni machine, Comcast Spectacor’s purchase of renewable energy credits will contribute an additional annual reduction of more than 1,700 metric tons of carbon dioxide equivalent greenhouse gases. That reduction is equivalent to removing more than 370 passenger vehicles driven for a year.

These developments are in addition to Wells Fargo Center’s 100 percent renewable electricity initiative, which was achieved through an agreement with Constellation that completely powers the arena with wind. The wind power generation avoids more than 15,000 metric tons of greenhouse gas annually which is equivalent to the amount produced by 3,373 passenger vehicles over the course of a year. All of these efforts will provide Comcast Spectacor facilities with 100% renewable electricity and supports Comcast NBCUniversal’s long-term aspirational goal of achieving 100 percent renewable energy.