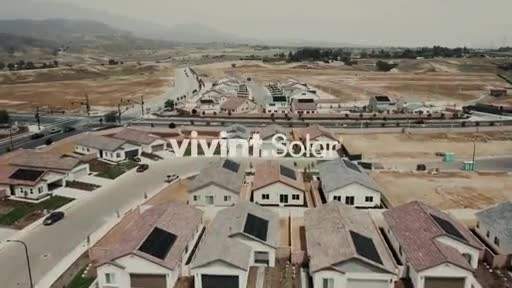 A new survey reveals American adults are much more eager for renewable energy than their elected representatives seem to be, with 70 percent saying they would support a nationwide mandate requiring solar panels to be installed on all newly built homes. The survey, conducted by CITE Research on behalf of Vivint Solar, also revealed significant others and environmental experts are the most influential when deciding to install residential solar for the good of the environment, while politicians are the least influential by far.

“California was the first state to pass a solar panel mandate on new homes and it goes into effect in 2020. We’ve seen that state often lead the way in establishing environmental practices nationwide,” said David Bywater, CEO of Vivint Solar, which has installed solar energy systems on more than 160,000 U.S. homes. “We believe more states will make strides to adopt residential solar requirements, and it’s great to see the vast majority of American adults support this, even at a nationwide mandate level. With nearly a million new single-family homes built annually, if all of them took advantage of solar energy, it would be equivalent to driving 12 billion fewer miles a year or consuming 12 million fewer barrels of oil.”** 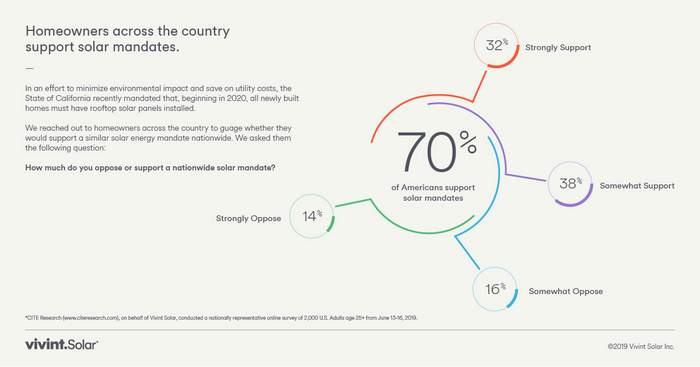 • While support was strong across the country, those in the West were the most supportive with 72% in favor. This was closely followed by 71% in the Northeast, 68% in the South and 67% in the Midwest.

• Relationship-wise, single survey takers showed more support for the solar mandate, with 73% of them in favor, compared to 68% of survey takers who are married or living with a partner.

As residential solar is currently optional for existing homeowners, survey takers were also asked who would most influence their decision to install solar panels on their home for the good of the environment. Spouses/significant others proved the most powerful force, with 58% of survey takers claiming they would be influenced by them (36% a great deal of influence, and 22% some influence). Environmental experts were the next most influential, with 57% saying they would be influenced by their opinion (28% a great deal of influence, 29% some influence).

Politicians are the least influential, with just 19% of people saying a political figure would influence their opinion to go solar for the environmental benefits (6% a great deal of influence, 13% some influence). And while politicians don’t rank highly overall, data shows the older you get, the less likely you are to be influenced by them. Among survey takers, the percentage who say politicians have no influence: 46% for those aged 25-34; 49% age 35-44; 59% age 45-54; 64% age 55-64, and 73% of those aged 65+. Comparatively, 29% of those 25-44 claimed politicians would have some or a great deal of influence, while only 7% of those 65+ stated the same.

Other solar decision influencers include friends (45% influenced by them), children (36%), other family members (36%) and parents (34%). Specific to children, the influence is greatest when they live in the home, where 22% of survey takers say their children have a great deal of influence, and 29% say they have some influence.