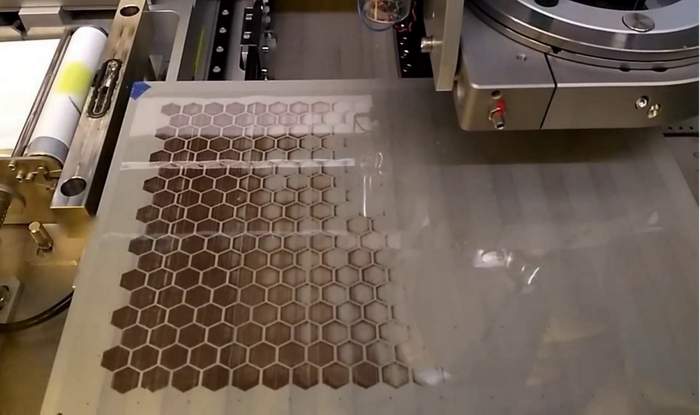 Perovskite seems to have been with us for a decade and so far it has not changed anyone’s life, changed the price of solar, or eaten into any company’s profit. Well it’s about to, according to a new report from Rethink Energy, the energy research arm of Rethink Technology Research. The group posits that Perovskite solar will invade conventional solar in 3 distinct ways, beginning in the tail end of this year, firstly in tandem with existing silicon cells, then in tandem at the module level with silicon modules and finally in incredibly cheap panels of pure perovskite.

Why this matters. Perovskite has the potential in the long run to drop solar costs by 80%, but will initially simply offer 33% MORE electricity on a cell, in tandem with silicon, for slightly higher manufacturing costs. Over the next ten years it will cut 50% off traditional solar generation costs, and then continue falling in price. These advantages will see perovskites pass 29% of the global market by 2030, and if existing suppliers do not adopt perovskite early, they will fall by the wayside. This will create a landgrab in solar manufacturing all over again, with perovskite leaders able to undercut pricing and double the Levelized Cost of Ownership lead that solar already has over other electricity generating technologies.

This report from Rethink Energy is an early take on the market just as it begins to go into a concerted manufacturing effort – starting in Europe, China and the US, with early adopters in Japan and South Korea expected to use the technology to re-ignite their domestic solar industries.

The gist of their prediction: In the conventional module market, growth will be supply constrained and only gradually reach 7% of the market by 2025, but suppliers will sell every panel they can make either from a price advantage or a power improvement, and this will drive manufacturing capacity until it begins to unseat silicon at the tail end of this forecast, in the run up to 2030. 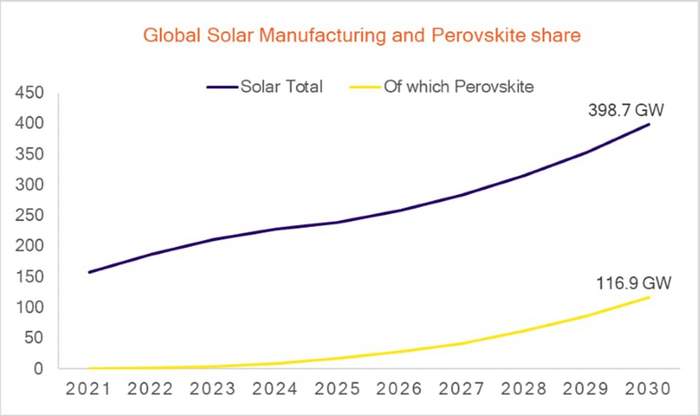 Perovskites are an entirely new materials science built around some 10 or more metallic elements which form a particular crystalline form, all of which exhibit PV properties. This science now has one foot in academia and the other in the real world of industry. Major corporations which are not currently in solar cell manufacturing, but in neighboring technology areas, are poised to use perovskite to leap into solar manufacturing and disrupt the entire global solar eco-system.

Similarly, countries which have come to rely upon Chinese solar panels, particularly South Korea and Japan, will use the emergence of perovskite technology to try to intervene in the solar market and develop home players, as will both Europe and the US.

Perovskite will also create an entirely new series of technologies including building integrated PV (BIPV) – in windows, on the sides of buildings, on devices, which are not conventional solar – in other words which don’t need to last for 25 years or centrally feed an electricity grid, and which are easily and cheaply replaced, more like a printing process than a module manufacturing plant. This report has not forecast these technologies at this time, and has concentrated solely on the impact on conventional solar.

Over the course of just a decade, perovskites will take PV technology by storm, with vastly reduced raw materials and manufacturing costs, and the promise to surpass the efficiency ratings of even the best silicon PV. Besides which, perovskite modules are light and thin, lowering the price of installation and Balance of System costs.