Mercom Capital Group, llc, a global clean energy communications and consulting firm, released its report on funding and merger and acquisition (M&A) activity for the global solar sector in the first quarter of 2018. Total corporate funding (including venture capital funding, public market, and debt financing) into the solar sector in Q1 2018 fell 65 percent quarter-over-quarter (QoQ) to $2 billion from the $5.7 billion raised in Q4 2017. Year-over-year (YoY), Q1 2018 funding was 38 percent lower than the $3.2 billion raised in Q1 2017.

“After a strong fourth quarter in 2017, financial activity slowed again in Q1 2018 to the post-tariff announcement levels of last year as uncertainties and a lack of clarity in the markets took a toll on investments,” commented Raj Prabhu, CEO of Mercom Capital Group. “The bright spot during Q1 was a record-high number of solar project acquisitions, proving that solar power generation is a sought-after asset class.” 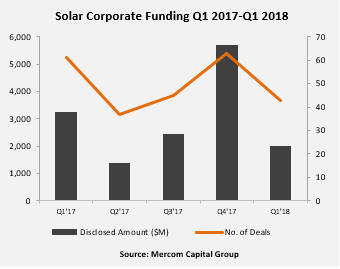 The majority of the VC funding raised in Q1 2018 went to solar downstream companies with $124.5 million in 18 deals. 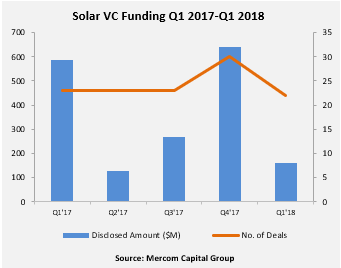