The United States in 2019 will become the world’s largest market for grid-connected battery energy storage as solar-plus-storage and peaking capacity requirements drive increased procurement, according to IHS Markit.

Deployments of grid-connected energy storage in the United States this year are expected to amount to 712 MW. This represents a near-doubling from 376 MW in in 2018. On the strength of this performance, the United States will surpass South Korea, which will see the market drop below 600 MW or even significantly lower.

The increasing market activity in the United States is being propelled by significant regulatory and policy developments as well as the diversification in major applications and geographic activity.

The strong performance in 2019 represents a complete turnaround from 2018, when U.S. deployment stagnated and South Korea boomed. The year 2018 set a record for grid-connected battery energy storage as global installations nearly doubled, largely driven by growth in South Korea in the first half of the year. However, growth in the United States was slower, with deployments increasing by only about 22 percent.

In 2019, several major factors have come into play to fuel U.S. growth, including:

• Federal policies such as FERC Order 841 are driving regional grid operators across the country to incorporate additional market mechanisms that will enable more participation of energy-storage resources in wholesale market activities.
• The investment tax credit (ITC) currently available for solar is driving the development of a rapidly growing utility-scale solar-plus-storage project pipeline, particularly in the Western United States.
• State-level energy storage mandates and incentives to help kickstart development in progressive markets that are also wrestling with relatively high levels of renewable energy penetration.
• Utilities are ramping up procurements of both behind-the-meter and front-of-the-meter energy storage resources to integrate higher levels of renewables and provide additional grid services such as demand response. 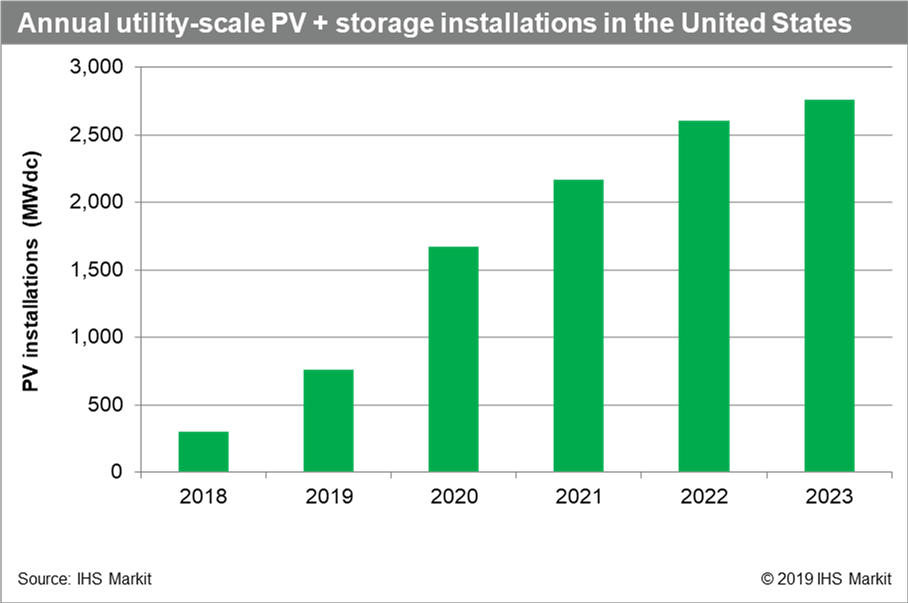 IHS Markit expects over 2 GW of energy storage to be paired with utility-scale solar photovoltaic (PV) systems from 2019 to 2023 in the United States. The availability of the ITC through 2023 for battery-storage systems coupled with solar PV has spurred development over the past year and will be the primary driver of co-locating utility-scale PV with energy storage. The majority of these systems are projected to be deployed in markets across the Western United States, including Hawaii, California, and Arizona, enabling further integration of PV in relatively saturated markets.

Cost synergies and operational efficiencies for pairing the two technologies can provide significant value, but they are overshadowed when comparing the opportunity of reducing the capital costs of energy storage by up to 30 percent with the ITC.

DC-coupled systems can have a small, but significant cost advantage over AC-coupling depending on system size and characteristics, with the primary benefits including the reduction of power conversion equipment required and the ability to recapture DC energy otherwise clipped. AC-coupled systems are better suited for flexibly participating in a wider array of ancillary services, while both system types can leverage the ITC and benefit from shared installation and operational costs.

In terms of the 30-year levelized cost of energy (LCOE), IHS Markit estimates that adding 25 MW / 100 MWh of energy storage to a 100 MWac single-axis tracking PV system in 2019 could increase the pre-ITC cost of energy by 35 to 40 percent, assuming the battery system is replaced after 15 years. After accounting for installation and operational synergies of DC-coupling and applying the ITC to the cost of both solar and energy storage, an LCOE below $40/MWh can be achieved.

By 2023, IHS Markit forecasts solar-plus-storage will be a competitive resource compared to new natural gas resources in the United States.