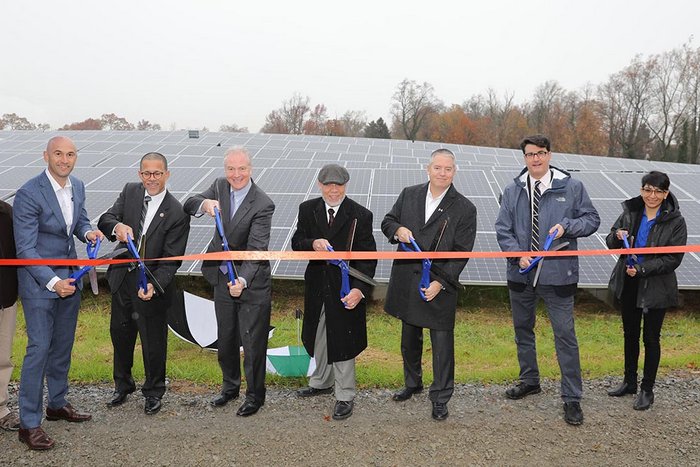 Sol Systems, Under Armour, and Greenbacker, along with government officials cut the ceremonial ribbon to celebrate the 3 MW solar project in Capitol Heights, MD

Under Armour joins the ranks of corporations prioritizing renewable energy and sustainability goals. Increasingly, top U.S. corporations like Under Armour are choosing solar to power their operations, save on electricity, and reduce their carbon emissions. In fact, corporations drove nearly 25% of the total amount of solar energy capacity that was procured in the United States in 2018, pushing the industry toward more innovative financing and power-purchase agreement structures.

Sol Systems, Under Armour and Greenbacker cut the ribbon on a freshly completed 3 MW solar project, located in Capitol Heights, Maryland on Nov. 22. Joined by United States Senator Chris Van Hollen, Congressman Anthony Brown, and several Prince George’s County, Maryland officials, the ceremony cleared the way for the system to now begin powering two of Under Armour’s facilities in Maryland, including its headquarters.

“At Under Armour, innovation is at our core,” commented David Bergman, Chief Financial Officer of Under Armour. “This project is a perfect example of innovation and efficiency,” he added.

Sited on an unused plot of land that was deemed unsuitable for residential development, the 3 MW solar project, will produce enough energy to power the equivalent of 333 average U.S. homes annually while contributing approximately $1.4 million in tax revenue to Prince George’s County over the length of its service.

Sol Systems initially began developing this project in 2016, arranging the financing and construction of the project before selling it to Greenbacker Renewable Energy Company. The electricity generated by the plant will be sold to WGL Energy Services, who will then exclusively provide it to Under Armour for 12 years.

”We started our company around a kitchen table 12 years ago, and wanted to make an impact on the future, said Yuri Horwitz, CEO of Sol Systems. “This is the physical representation of what we sent out to do: reinvest in the community and offer a positive contribution to the DMV.”

“The private sector has really come together here,” said Senator Chris Van Hollen, “this is a win-win-win for consumers, jobs, and for our environment,” he continued.

“[The project] demonstrates that renewable clean energy and job creation are not mutually exclusive. In fact, they are mutually reinforcing,” said Congressman Anthony Brown.

This solar project will be almost entirely surrounded by newly planted and existing trees, including maple, oak, pine, and cedars, creating a visual buffer for the site. The new plantings constitute a 1.5 acre woodland conservation easement that will be conserved in perpetuity beyond the life of the project.