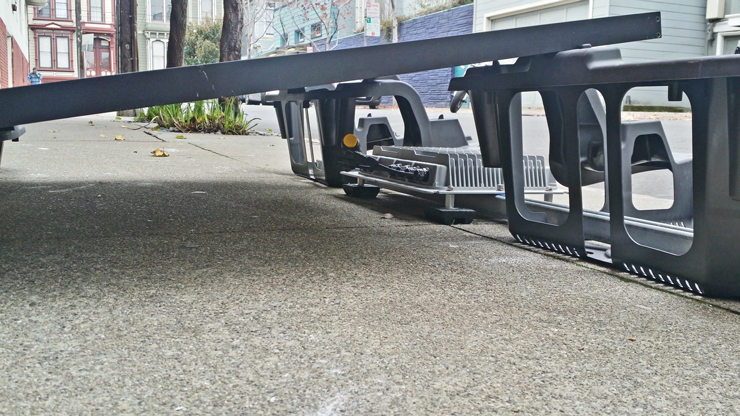 Sollega and HiQ Solar integrated their racking and inverter products.

PV systems are just a series of connections — modules to strings, panels to racking, inverters to the grid, etc. These pieces often all come from different places, and an installer can find real benefit in solutions that come ready to connect quickly and easily — like the integration Sollega and HiQ Solar achieved with their racking and inverter products.

Separately, both products are fairly unique, so let’s start there. HiQ’s TrueString line of inverters look like microinverters in that they are smaller (24 lbs for 8 kW) and mount under the array, but the TrueString is actually a three-phase string inverter. It has two DC inputs, and each takes a single 1,000-volt string.

That design has a few implications for a system. Being mounted right next to the PV module strings, and having only one string per input, makes accurately detecting arcs much easier. With only one string on each input, every string can be a different length to simplify tricky roof layouts involving inverters with paralleled strings that all have to be the same length. HiQ says these individual strings also improve harvest, monitoring and allow for the replacement of PV modules as needed. The inverter’s s NEMA 6 rating means it can sit on the roof, be mounted at any angle,and has no display that will wear out in the sun. It is waterproof and contains no electrolytic capacitors, allowing it to be used at altitude, desert or coastal applications. The connectors are the certified means of disconnect, meaning that the installer can save money.

Notice that much of the HiQ TrueString uniquess comes from its location under the array. This is where Sollega’s modular form comes in.

“They have assembled a kit that allows our inverter to bolt to a strut that they supply, anchoring it securely to their ballast-mount racking. The kit includes spring nuts, bolts and strut,” says Guy Foster, VP of marketing for HiQ Solar.

The result is an inverter that snuggly fits in as a component of the racking system.

The HiQ portion of the integration is its ballast mounting kit, comprised of nuts and bolts that attach the inverter and four individual feet made of recycled rubber. T his allows the inverter to sit on a roof, raised above the surface by about two inches.

We spoke with Elie Rothschild, sales manager for Sollega, at the NABCEP Continuing Education Conference, and he thinks inverters mounted under the array is the next big industry trend. Not all inverters are up to the task right now, but even if they were, not all mounting systems are as ready to accommodate as Sollega’s FastRack 510.

“We use a standard rail system (1 5/8-in. strut) for attachment which is the most cost-effective rail,” Rothschild says. “The integrated rail channel slots enable mounting options for both north-south and east-west for HiQ inverters. It utilizes the existing mounting holes on the inverter and also provides a wire chase.”

The FastRack’s modular design also makes accessing the inverters easier once the job is complete.

According to some recent case studies complied by HiQ, its inverters save between 5 cents and 7 cents per Watt for 480-volt systems, without factoring in any difference in the cost of the inverters themselves.