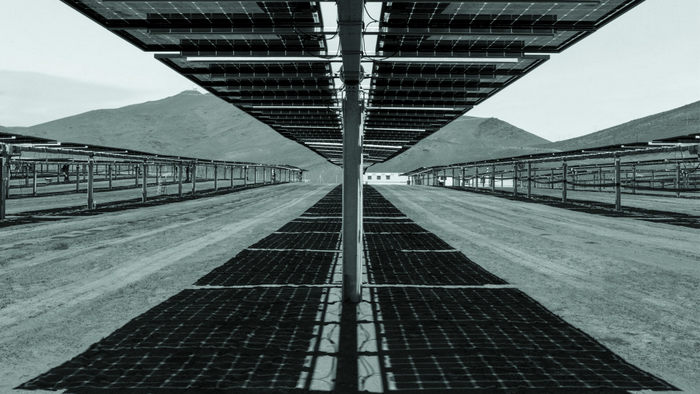 The bifacial solar PV era is dawning, and Soltec wants to understand the exact scenarios in which its tracker systems will maximize these assumed-yet-nebulous bifacial gains. The Spain-based tracker company made a splash at Intersolar North America two years ago when it unveiled its Bifacial Tracker Evaluation Center (BiTEC) in Livermore, Calif. Here, the company collaborated with National Renewable Energy Labs (NREL), Black and Veatch and RETC to rig up a variety of trackers to test for a slew of variables to pinpoint exactly why, when and where bifacial modules + solar tracking will thrive. Those variables include:

Understanding that last one is the biggest key for Soltec, which specializes in attaching 2 modules in portrait on a torque tube instead of the standard one (thus eliminating the torque tube from obscuring potential backside bifacial gains). A year and a half later, BiTEC has produced a ton of interesting data points, which Soltec has reported in a series of white papers. Here are the overarching takeaways.

Albedo is the most important variable by far

Unfortunately, those high albedo conditions aren’t too common. Under seasonal albedo conditions, in which ground albedo changes throughout the year and is lower in the winter due to taller grass, bifacial gain was shown to be 7.9 percent in the fall and 6.5% in the winter. Lower irradiation values in winter months minimize negative impacts on annual bifacial gain, which is eventually quantified at 7.7%.

Remember, these tests were performed near San Francisco. In part 3, these measurements reveal that seasonal albedo remained stable around 19 percent until the rainy season in California, in late November 2018. From then on, grass growth caused an accumulated value reduction to 17.2 percent. When grass was cut in March, seasonal albedo values increased again, reaching a value of 19.6 percent during the 9-month period.

Pitch impact on bifacial gains is a factor closely linked to albedo. In fact, Soltec’s testing didn’t show much of a bifacial gain due to an increase in pitch in low albedo conditions. Having wider aisles does increase the surface area that’s able to reflect solar irradiation, but Soltec’s testing showed a pitch-related bifacial production increase only when albedo values increased. Both effects were observed at BiTEC by comparing the instantaneous power of modules assembled on SF7 Bifacial 2x solar trackers with different pitch and similar albedo.

“Measured data shows, on the one hand, that trackers with the highest pitch generate more energy in the early hours of the day because tracking starts earlier and, on the other hand, that instantaneous power during tracking time is larger for trackers with higher pitch due to an increased view factor,” the company states in the report.

The case for 2x modules in portrait

Individual modules deployed in SF7 Bifacial tracker’s 2x configuration showed a bifacial gain 2.1% higher than that of the same modules in 1x configuration. There are several factors adding up to hit that number and, surprisingly, avoiding the impedance of the torque tube is not the main reason.

The SF7 Bifacial tracker design allows for airflow through the tracker and elevates modules higher off the ground. The upper module temperatures in a 2x setup are lower than in a 1x configuration, and lower performance temperatures mean increased power generation.

Time of day is also part of the story. The power difference in 2x vs. 1x is minimal during initial tracking hours but increases later in the day. Those results are consistent with air temperature changes throughout the day (colder in the morning, warmer in the evening).

Also concerning time of day: Comparison of the evolution of the curves throughout the day reveals that, the lower the height of the module, the greater the differences between the rear irradiation in the measured points. That means that East module rear irradiation mismatch is higher in the morning whereas West rear irradiation mismatch is higher in the evening. Long term measurements support that the aggregated mismatch effect for a full month results in 0.06% energy loss for bifacial modules, whereas for monofacial modules, results in 0.04%.

To learn more about rear radiation distribution, Soltec installed numerous pyranometers cross-sectionally to the modules in 1x tracker and in a 2x Soltec tracker. A comparison of the field-data in both trackers and the simulations from Bifacial Radiance of NREL revealed a rear side an average Mismatch Loss Factor of 3.1% in the SF7 Bifacial tracker, while the preset value in PVsyst is 10%. In other words, increased height of the SF7 Bifacial Tracker reduces mismatch losses.

Sum it all up

When deciding if a bifacial solar tracker setup is right for your next site, do a ton of due diligence on the site’s albedo and its seasonal changes (and how increased pitch / 2x module configuration temperature gains might factor into that). Maybe run some calculations that consider scenarios in which you alter/improve the site’s albedo and see if it will pay off over time (maybe those changes will also reduce O&M costs over time too?). With the drop in bifacial module prices, all of those little performance advantages might add up to a meaningful difference in expected outcome.