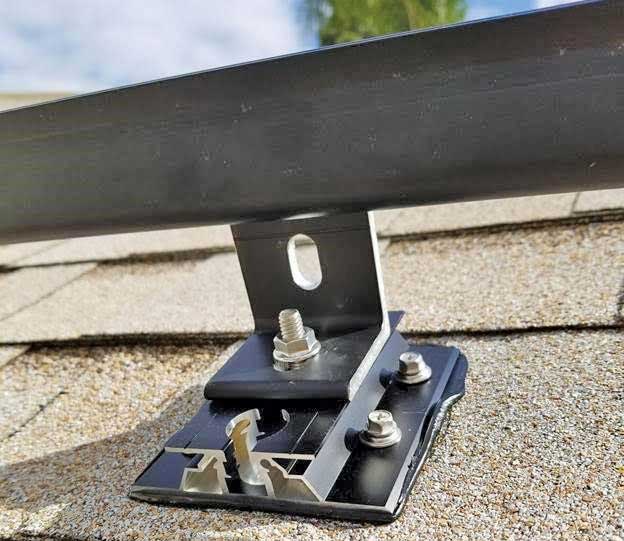 Whidbey Sun & Wind was founded in 2000 by Kelly Keilwitz who oversees a staff of 10 from their office in Coupeville, Wash., in northern Puget Sound. The company provides a wide range of renewable energy solutions to residential and commercial customers across five counties and in the San Juan Islands. Whidbey’s crew includes five NABCEP-certified PV installation professionals and offers full design and installation services for solar PV systems.

“Back when I started this company in 2000, there weren’t many options for mounting solutions and we had to invent things for ourselves,” he explained. “For many years we used L-foot brackets to attach rails directly to the roof, pre-drilling holes and then sealing each hole with a strong polyurethane sealant that worked perfectly.”

He stressed that his company never used flashing for PV installations in the early years, but when his crew took the training to become NABCEP certified, things changed.

“We decided to follow roofing industry standards and conform to best practices at the time,” he said, “so we began to use flashing on our jobs.”

As Keilwitz explained, that change meant his installers had to go under two layers of shingles, pry out the existing roofing nails, and slide the flashing under the shingles. After Whidbey’s crew began using flashing on their jobs, however, the company’s previous point of pride of having “no leaks” was challenged.

“We discovered that pulling out the roofing nails left holes in the underlayment which made the roof vulnerable to leaks,” said Keilwitz. Adding to the issue is that there are many low-pitched roofs in the northern Puget Sound region, so windblown rain often sends rainwater back up under the flashing and causes leaks.

“In the past few years, we’ve had to replace entire sections of roofing for a few clients who experienced leaking after extraordinary windblown rain events although the flashing for all of these were installed according to manufacturer’s directions,” Keilwitz conceded. “Our reputation is everything, so we decided to find an attachment solution that didn’t require disturbing the shingles or leaving unplugged holes in the underlayment.”

Keilwitz and his team learned about Roof Tech from a trade publication. They liked the fact that RT MINI uses butyl rubber to seal all the lag bolts and recognized that butyl rubber is an even better sealant than the polyurethane they used on their early jobs.

“I had learned about butyl rubber some years ago,” Keilwitz noted. “We used to use it to install solar water heaters, so I knew it was a great sealant.”

So far, Whidbey has used RT MINI on residential projects. “Although our crew prefers to attach to rafters or trusses, it’s great that RT MINI also offers a deck-mounting option we can use when it’s difficult to locate rafters or when deck-mounting is the only option,” said Keilwitz. “It’s just a much better mounting solution because it’s truly waterproof, even in extreme windy and rainy weather. Plus, it saves us lots of time over using the flashed L-foot technique. For us, finding RT MINI was like going full circle, and ending up in an even better place.”