Bishop O’Dowd High School has a two-story classroom building facing southeast. The classrooms get very hot during the day when classes are in session. They want to reduce the heat to improve the learning experience of the students. They either had to install air conditioning or create an awning to shade the windows. They opted to create an awning structure that uses solar panels to create shade and electricity. The new solar (PV) powered awning shade structure improves the indoor environmental quality (IEQ) for students and faculty by reducing temperatures by 7 to 10 degrees on the south side of the building. It is also more financially sustainable at just 10 percent of the cost of an expensive energy intensive air-conditioning system. Additionally, at a count of nearly 200 solar panels, the project aims to generate $15,000 worth of electricity energy savings each year. Finally, O’Dowd can be proud to take another step forward in its environmentally sustainable goal to be zero-net energy and reduce overall GHG emissions. The teachers have given the system high praise.

The Camillus House Energy Project is the result of an experimental course to incorporate a hands-on approach to philanthropy for students at Florida International University. Communication Arts student Chloe Danielle Castro won the grant for IDEAS For Us, an international sustainability NGO based in Orlando, whose mission is to develop and implement solutions that create a better and more sustainable future for all. As the course progressed, the idea was for the project to benefit others as well as the environment. So together, she and the team at IDEAS For Us created an energy project concept by identifying a set of practical goals that would have the largest community impact. Along with other initiatives (LED lights, smart thermostats) they added a 20-kW solar array on one of the Camillus House residencies. The benefits of this bi-fold plan will help to lower utility bills for Camillus House, and power a portion of their building from clean renewable energy, ultimately allowing them to allocate more funding to their mission of helping people in need. The local contractors included Citizen Energy, and Advanced Green Technologies, both who made hefty contributions to the project. The project also received a solar grant from FPL, which allowed for the team to double the solar array from 10 kW to 20 kW.

In January 2010, Britney Gengel, a 19-year-old student from Massachusetts was killed in the devastating earthquake that struck Haiti while volunteering in one of the country’s local orphanages. To honor Brit, her family started a foundation and built a 22,000-sq-ft earthquake-proof orphanage shaped in the letter B, for Brit, in Grand Goave, Haiti. Prior to the installation, Be Like Brit got its electricity from the local utility, which was unreliable and cost the organization around $4,000 per month. Solect, along with two local subcontractor partners from Massachusetts, sponsored two installation team members to travel to Haiti to lead the installation. Solect donated 50 solar panels to the orphanage in order to manage construction costs for the organization and ensure that more of the non-profit’s donations could be used to provide care for the children, instead of paying for electricity. The finished project now provides 60% of the electrical needs of the orphanage. The project is one of a kind in that it utilizes large-scale battery storage for a commercial project. The battery system for Be Like Brit consists of 48 two-volt batteries, which is an incredibly large amount of back-up power for a system of this size. 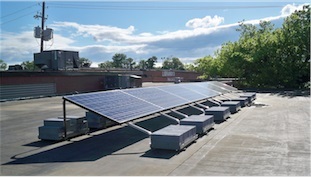 Schaedler-Yesco Distribution had some inventory they acquired a few years ago while solar was booming in Pennsylvania that had been sitting on the shelves in recent years. Upper management wanted to discard or dispose of the excess inventory but their energy manager was reluctant to get rid of it. Contractor Edwin L. Heim Co. had discussions with them and offered its labor for both systems if they could supply materials for both. The Schaedler Yesco first system now ties into a 225 amp panel, at 120/208 volt three-phase four wire. In the future, the Engage cable can be extended to serve 18 additional microinverters to complete circuit one. The second system is similar except the tie-in was to a 200 amp single phase panel. This complete system would be 35 microinverters and modules (8.925 KW total). The six microinverters now will become seven in the future on circuit one. Two more circuits can be added in the future for 14 microinverters and modules on each circuit. The infrastructure was designed and sized for the complete system at the beginning. 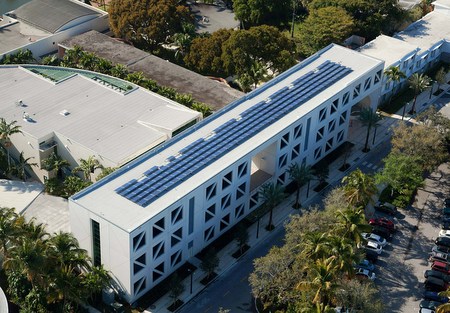 Designed by award-winning architects Yann Weymouth and HOK, and constructed by Skanska USA, the University of Miami’s new Frost School of Music facility boasts two buildings with 41,089 sq ft of upscale teaching spaces and beautiful curb appeal. Located on UM’s Coral Gables campus, the Patricia Louise Frost Music Studios is seeking to be the first LEED Platinum certified building in the City of Coral Gables, Fla. Additionally, the completed rooftop solar arrays are built to withstand 180 mph wind speeds, qualified for a 20-year NDL on all penetration flashings from the roofing manufacturer and helped the building qualify for two LEED points in the energy efficiency category. The roof system from Siplast was unique because of the LEED point acquired through the Eco Active cap sheet and the ability to bundle the light-weight concrete decking and mod bit roofing system under the same 20-year warranty. The completed solar arrays will offset 13% of the building’s total energy consumption and produce 101.344 MWh annually.

In the summer of 2014, Standard Solar partnered with Pepco to develop an innovative behind-the-meter solar microgrid demonstration project at the WaterShed Sustainability Center in Rockville, Md. It is a rare installation for both its technology integration as well as its behind-the-meter project type. The solar microgrid project was developed in a public setting designed to highlight the system’s capabilities. Pepco’s WaterShed Sustainability Center showcases a variety of environmental initiatives and seeks to educate the public about energy-efficient and environmentally-friendly practices. Incorporating grid-integrated storage with solar PV has the potential to reduce overall PV project costs and offers new benefits to hosts, including backup power, demand reduction and peak shaving. The system can seamlessly charge and discharge from the grid, islanding itself as needed to complement the electricity grid and improve load balancing. With the help of an intelligent load control system, the microgrid can increase its autonomy in a grid outage situation. The system can be configured to perform multiple functions, manually or on-demand with customer programming.