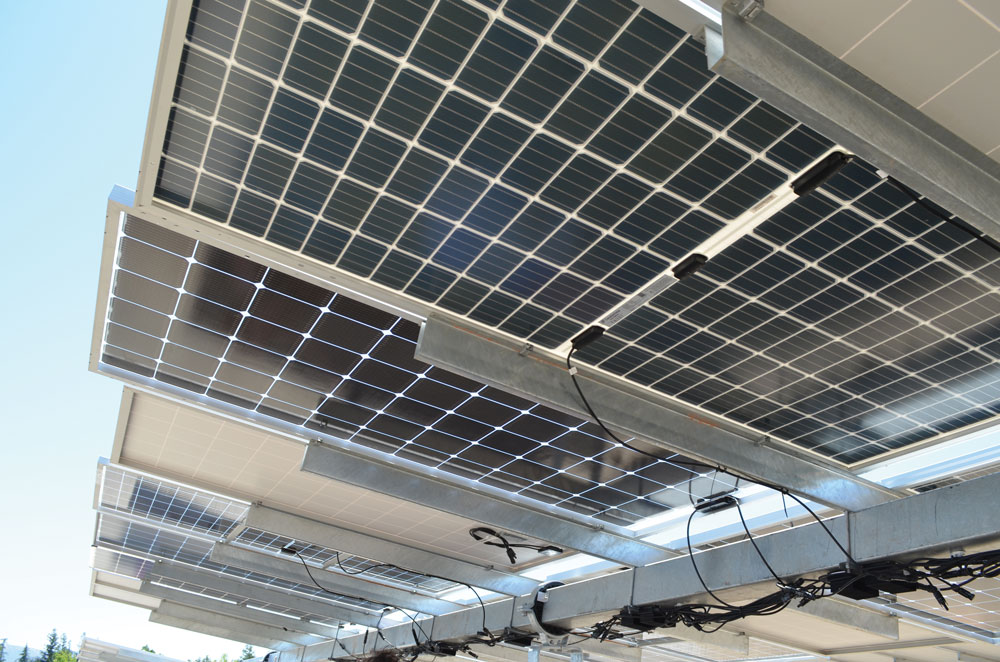 Soltec is testing for all bifacial tracking variables at its new evaluation center in Livermore, Calif.

Soltec has launched a second white paper to detail the year-long findings of its Bifacial Tracker Evaluation Center (BiTEC) results located in Livermore, Calif. You can access it for yourself here, but here are some of our takeaways.

1 The main objective of this project is for Soltec to measure the bifacial gains 2-in-portrait tracker (2P) configuration would show versus the traditional 1-in-portrait tracker setup, accounting for various factors like albedo, tilt and height. Over the course of the year, Soltec SF7 Bifacial solar trackers in 2P obtain 2.2 percent more Bifacial Gain than trackers in 1P.

3. It was noticed that during the humid season, rain puddles caused surface reflection with an atypical effect on bifacial modules. “Despite the interest of such reflection, it is important to mention that short-lived albedo increases do not translate into significant power generation gains,” the researchers noted. “In fact, albedo decreases during subsequent days due to the dark color of wet ground reflects less sunlight.”

4. Operating experience seems to support the hypothesis that albedo, and in turn the radiation reflected by the rear side of modules, decreases in humid environments and with higher solar angles during winter months (under the latitude conditions of BiTEC).

6. 2P module temperatures tend to be lower than those of 1P trackers, according to the BiTEC field tests. SF7 Bifacial tracker design allows for airflow through the tracker and considers the installation of modules higher above the ground, hence favoring overall cooling. Lower performance temperatures lead to increased power generation.

8. Rear side module irradiation is not homogeneously distributed, meaning some module areas may receive more radiation depending on tracker tilting. Such module irradiation variation may lead to a power loss than can be accounted for in PVsyst as a percentage generation loss known as mismatching loss. In other words, a generated power loss caused by generation misalignment inside the actual module. This value is not fixed and depends on height of the module in each angle. Thus, such radiation would also be distributed differently in 1P and 2P trackers.

9. To learn more about rear radiation distribution, Soltec installed numerous pyranometers cross-sectionally to the module in 1P tracker and in a 2P SF7 Bifacial tracker by Soltec. A comparison of the field-data in both trackers and the simulations from Bifacial Radiance of NREL revealed a rear side an average Mismatch Loss Factor of 3.1% in the SF7 Bifacial tracker, while the preset value in PVsyst is 10%. In other words, increased height of the SF7 Bifacial Tracker reduces mismatch losses.

10. For all of the findings that apply to Soltec’s tracker’s specifically, the report also recommends the corresponding values you could input into PySyst to account for these findings.