That’s the new PV capacity in 2017, led by strong growth in the corporate and community solar segments. This is the second year in a row that solar additions hit double-digits. But…

That’s the decrease year-over-year from 2016’s record-shattering 15 GW. The year-over-year downturn for the utility segment in 2017 was the big culprit here, and was largely expected, due to the massive influx of installations rushed in, anticipating the expiration of the Investment Tax Credit. 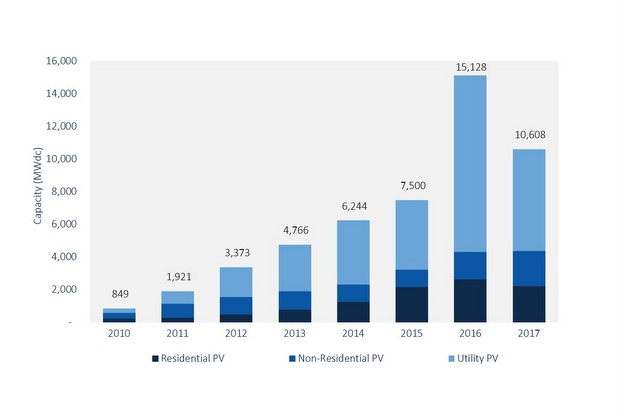 If you skip 2016, viewing it for the anomaly it may have been, solar additions in 2017 grew 40 percent growth over 2015’s installation total.

That’s the year-over-year growth in the non-residential market segment in 2017 – its fourth straight year of annual growth. Last year in particular saw an “explosion” in the community solar market, led by Minnesota and Massachusetts.

That’s the percentage decrease in the residential sector year over year. This contraction was driven by weakness in California and major Northeast markets, which continue to feel the impact of pullback from certain national installers that have shifted away from rapid-expansion strategies. Both residential and utility-scale installations fell on an annual basis for the first time since GTM Research and SEIA began publishing the report in 2010.

That’s the number of states in the top 10 markets for residential solar that showed growth. Insert sad trombone noise here.

Of the remaining 44 states tracked in the report, 25 saw year-over-year growth in annual residential PV installations with several states climbing up in the rankings. Florida managed to break into the top 10 states for the first time since 2011, jumping to the No. 10 spot for cumulative solar capacity installed. Over the last year, South Carolina also saw big gains, moving up 9 spots in the new rankings to No. 18 in the U.S. California and North Carolina remain the two largest solar states after adding the most and second-most capacity in 2017, respectively. 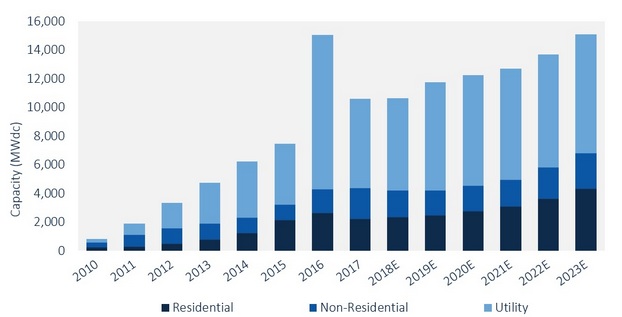 That’s how much GTM Research lowered its base-case forecast for 2018-2022 because of the federal and state policy changes and market dynamics.

Even after that drop, GTM still sees that much solar being installed on an annual basis by 2023 and expects capacity to double over the next five years.

That is the GTM Research forecast for new PV installations in 2018.