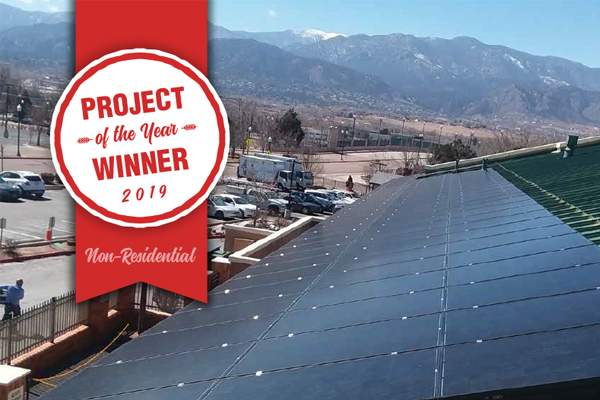 In physics, energy is defined as “the capacity to do work” or as “potential realized.” This is true of solar panels, obviously, but also everything else. All matter is just energy in some form. The 2019 Solar Builder Non-Residential Project of the Year is a perfect case study of energy flow beyond mere kWh.

If you stumbled across a pallet of outdated solar panels in your warehouse one day, what would you do with them? This is what happened to Phil and Nancy Brodhagen, owners of Peak View Solar, a small Colorado-based solar installation company, earlier this year.

Back in 2008, Phil Brodhagen felt he had the capacity to do different work and left his IT career after 25 years in the field to study renewable energy. He became a contractor at the insistence of his professors and eventually formed Peak View Solar (a DBA of El Paso Green Energies LLC) in 2010. The business amassed momentum slowly. In 2016, Peak View Solar contracted with a sales team. Soon, his sons Matt and Doug joined as full-time employees. Wife and co-owner Nancy left her accounting career to join full time in 2017, and their daughter Debbie joined in 2018. In addition, there are 25 non-Brodhagens employed at Peak View.

Cut back to the warehouse that day, Phil and Nancy knew they wouldn’t be able to sell those old panels, so they decide to donate a system to a local charity. Since the beginning of their new beginning, the Brodhagens made supporting local causes a key principle of their business, donating to organizations such as the Sturge Weber Foundation and Juvenile Diabetes Research Foundation.

For these panels, Nancy was consciously or unconsciously guided by the sudden passing of her mother earlier that year. Her mother was a devout Catholic.

“We researched the roofs of a few places we knew about, and the Marion House is a food kitchen run by Catholic Charities of Colorado that has this beautiful roof — we thought my mom would really have loved that,” Nancy tells us. “I contacted them, and I was fortunately connected with Jim Benavidez [the house director at the time]. He was passionate about it and just as excited as we were. Once we connected, he showed me the utility bill. Realizing their bill was substantially higher than we thought, it put our small donation into perspective.”
The project built momentum quickly. The Brodhagens knew they needed to do more, so they reached out to suppliers who assisted by offering equipment at cost. The sales team then pitched in toward the cost as well. They eventually grew that original pallet of 20 outdated panels to 90.

“The utility company and building department were very understanding and easy to work with, but the most memorable moment for me was when we talked to our team about the work,” Nancy tells us. “We explained what we would be doing and one of our workers quickly raised his hand. He asked if we could install on a weekend. Since we only work Monday through Friday, it was an odd request. He explained that he had used the services at the Marion House many times in his past, and he wanted to donate his time to the project and do the installation for free.”

Everyone on the crew jumped right on board with this. They weren’t actually able to do the work on the weekends because of how busy the Marion House is then, but the gesture is no less inspiring and worth noting.

The Marion House Food Kitchen is now benefitting from a 26.10-kW PV system. Since commissioning in mid-May, the system has generated 16 MWh. Peak View estimated the savings to be around $1,850 since May based on the average per kW charge. The Marion House also installed a new gas operated tilt skillet, which saved another $5,400.

Rochelle Schlortt, chief communications officer for the Marion House, told Colorado’s KRDO that they have about a $45,000 food budget, and the PV and the skillet are expected to combine to equal about 25 percent of the money used to feed the less fortunate.

That’s the power of energy. Not just from the sun to the PV panel, but from a flow neurons and electrons tracing back to a curious and ambitious IT professional, moving through an unfortunate loss and an error in inventory, that ended up leading to food for the hungry. Potential realized.