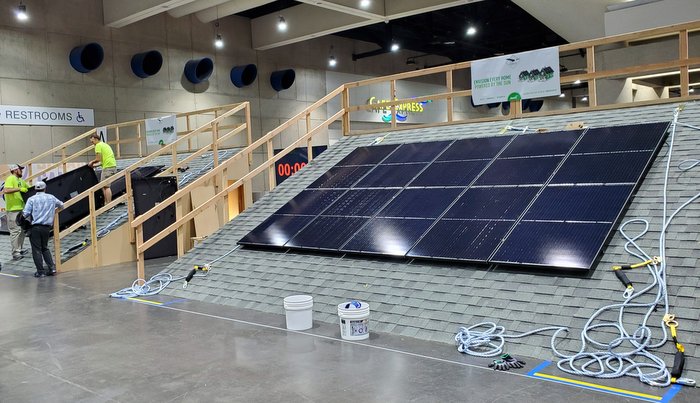 On day two of Intersolar North America, Sullivan Solar and Sol-Up went head-to-head in the final round of the Solar Games for the inaugural championship and a $5,000 prize. The two teams competed against each other in the first round of the games with a grid-tied system using Tesla Powerwalls and SMA America inverters, but faced a new challenge this round: installing an off-grid system.

With 90 minutes on the clock (and AC/DC playing in the background), the two teams raced to install PV modules provided by JinkoSolar, then paired with a charge controllers by MidNite Solar, and AGM batteries by Rolls Battery.  The final system also used Everest Solar Systems for racking components and AIMS Power for the off-grid inverters. Each team proved to be strong competitors, neck and neck every step of the way.

Sol-Up pulled into first place by earning 10 bonus points by finishing in under 75 minutes. Sullivan Solar finished just as the final buzzer alarmed and spectators applauded both teams impressive performances. Both teams completed their systems nearly identically—even making the same minor battery connection infraction—and yet, accumulating more points, the Las Vegas-based Sol-Up was named first-ever Solar Games Champion. At the end of the Games, the equipment was donated to Twende Solar, a non-profit organization who will use the components on a solar project for a children’s home in Peru, among other projects in the US.